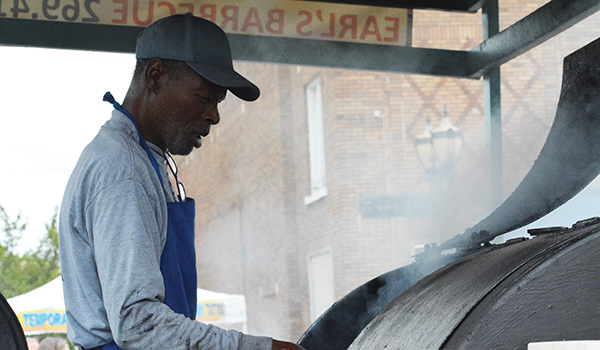 DOWAGIAC — Earl Collins is no stranger to the food industry.

A Dowagiac resident, Collins has been cooking since he was 12 years old, helping his parents run Collins’ Restaurant on Pokagon Street in the 1970s after moving to Dowagiac from Chicago.

When it was announced that Earl’s Barbecue would be a food vendor at last weekend’s 35th annual Summer in the City, the community took notice. Festival-goers flocked to Collins’ booth for a taste of his sweet, savory barbecue.

While Friday’s festivities were impacted by scattered rain showers, people came to his booth to satisfy their hunger.

“It was great,” Collins said. “It rained on Friday, but it didn’t stop people from buying food. I liked it, I think I will be in [festivals] going forward.”

It was Collins’ first time with the festival as a vendor. Collins’ brother, Larry, owner of Countryside Greenhouse and Art Enah Suit, has been participating for years. With the festival being one of Dowagiac’s biggest annual events, Collins decided to give it a shot.

Collins’ menu consists of many of the classic barbecue items, including ribs, rib tips, chicken and pulled pork. Earl’s Barbecue sets up shop at various locations in the community. Every weekday morning, Collins can be seen smoking meat at 6 a.m. in the parking lot of Aaron’s.

Born in Mississippi, Collins moved back to his home state in 1999 and traveled around the South to cook in various BBQ competitions and even earned multiple first-place prizes.

Collins moved back to Dowagiac in 2013 and decided to share his passion for barbecue with the community by opening a barbecue trailer. Collins attributed his business’ successful Summer in The City weekend to people looking to get out and be active after being quarantined last year due to the pandemic.

“Everyone’s been pinned up in their houses,” he said. “Believe it or not, I got more customers at Aaron’s during the pandemic than before it. People would drive in, order their food and drive right back out. We got tons of good business, and when the pandemic started slowing down, business got even better.”

INDIANAPOLIS — There were a couple of common themes during the two-day Big Ten Media Days at Lucas Oil Stadium.... read more