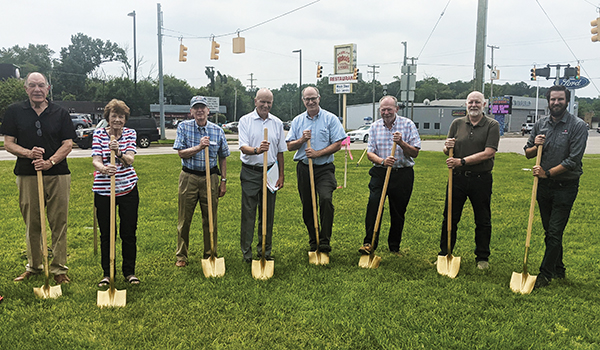 DOWAGIAC — A project years in the making is finally getting underway.

Members of both the Dowagiac Rotary Club and Dowagiac City Council were on hand Thursday for the groundbreaking ceremony for the club’s centennial sign, which will be erected on the piece of land bordering the intersection of M-51 and M-62 in front of Rite Aid in Dowagiac.

The project, which has been in the works for roughly three years, was implemented to commemorate the 100-year anniversary of the Dowagiac Rotary Club, which was founded in 1920.

“We thought this would be something lasting, that would be here,” said Rotarian and Dowagiac Rotary Charitable Foundation President Larry Crandall. “We wanted something that would be first-class and would be visible to both the public and people coming into Dowagiac. We’re truly looking forward to the completion of the project.”

The Rotary Charitable Foundation worked with the Dowagiac City Council to purchase a Right-of-Way from the Michigan Department of Transportation for $1,800 in order to place the sign on the piece of land bordering the intersection of M-51 and M-62, considered by many to be the busiest intersection in town.

The brick sign will read “Welcome to Dowagiac” and will feature the Rotary Club logo and special message bricks purchased by donors. According to Crandall, excavation is scheduled to start on Friday, July 23, weather permitting. Project contractors include Creative Vinyl, Wightman & Assoc., Lawn Boys, Wolford Electric, Quality Masonry and Monuments by Design.

Approval was granted by both the Rotary club’s board of directors and its charitable foundation board to provide the sign. The club then raised the necessary remaining funds through donations and the selling of commemorative bricks that can be purchased by current and past Rotarians, in addition to family members of deceased Rotarians. The organization then engaged the services of engineering firm Wightman for the development of the sign.

The project was endorsed by Mayor Don Lyons and the City Council.

“I have wanted this signage since I came into office,” Lyons said. “It’s a great sign. It ticked all the boxes I was looking for. It is in the right location. It’s monumental; It will have great presence and will speak well to the commitment of our community to individual aspects of our entryways, which we have spent a lot of time and money on over the last several years. On behalf of myself and the city employees, thank you, Rotary Club, for making a dream come true.”

As everything began to take shape, the project hit a snag when the club discovered that the plot of land the sign would be placed on is owned by the Michigan Department of Transportation and would have to be purchased from it. After filling out the paperwork, the club waited to hear back from MDOT regarding a price for the land, a wait they would endure for more than a year.

Cochrane thanked Crandall — a former superintendent for Dowagiac Union Schools — for handling the bulk of negotiations between city officials, contractors and the state.

“Anybody who knows management knows that you have to find someone really good and dedicated to lead that project for you and then you’ll look good when it’s all over,” Cochrane said. “I went out and found Larry and told him he’s in charge of this thing because he’s the head of the foundation. He has done so much over the last two years to make this project come together. We thought it was going to be fairly simple but it turned out to be very complex. Larry stuck with it the whole way and made it happen.”

DOWAGIAC — It was a car lover’s dream in downtown Dowagiac on Thursday evening. Engines were revved and horns were... read more