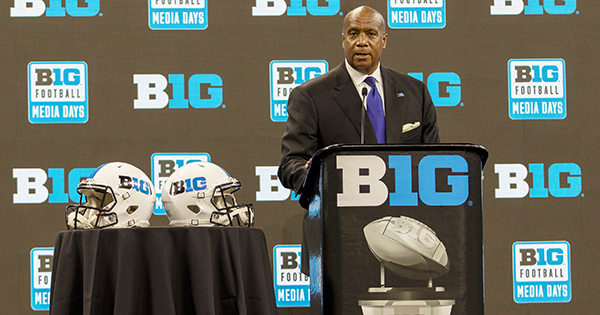 A legendary figure in both college football and the Big Ten Conference, the former University of Wisconsin head football coach and Director of Athletics earned membership in the College Football, Rose Bowl, Orange Bowl and Wisconsin Halls of Fame.

“Barry has been blessed with an illustrious career in college athletics, and his impact on college football and the Big Ten Conference has been significant,” Warren said. “He understands the history and traditions of the Big Ten. I trust Barry, and we look forward to working with him on relevant football-related issues and building upon the strong relationships we have with the College Football Playoff, our broadcast and bowl partners, as well as our member institutions and student-athletes.”

Following his arrival at Wisconsin in 1990, Alvarez led Wisconsin to the first Rose Bowl victory in school history in just his third season as head coach. One of just 16 football coaches in Big Ten history to win at least 100 games at one school, Alvarez retired from coaching after the 2005 season as Wisconsin’s all-time winningest coach with a record of 119-74-4. He led the Badgers to three Big Ten titles, three Rose Bowl victories and coached Heisman Trophy winner, running back Ron Dayne (1999).

Alvarez was named director of athletics in 2004 and spent two years in the dual roles of Director of Athletics and head football coach. Wisconsin enjoyed remarkable success during Alvarez’s tenure at the head of the athletic department, winning a combined 16 team national titles and 74 conference regular-season or tournament crowns. In 2017-18, he earned Under Armour Athletic Director of the Year honors.

BERTRAND TOWNSHIP — A road near the cities of Buchanan and Niles will see road work beginning next week. Starting... read more