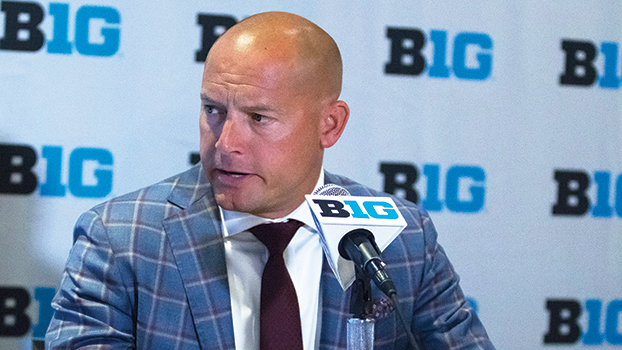 It has been a few years since I last attended the Big Ten Media Days.

There are a couple of reasons why myself and photographer Amelio Rodriguez have not made the trek to listing to the Big Ten coaches talk about the upcoming football season, get a “State of the Big Ten” from Commissioner Kevin Warren. One of them was the fact that the conference canceled the media days last year due to COVID-19.

I am looking forward to getting up early Thursday morning and meeting Amelio in Niles to begin our trip to Lucas Oil Stadium in Indianapolis. Our trips are always entertaining. I expect this one to be even more so as we have not spent any length of time together since he moved to South Carolina.

We were going to discuss and debate many things. We rarely agree on anything, but somehow we have become lifelong friends. We are going to talk college football, professional football and high school sports along the way.

The opening day is probably the most important to us as P.J. Fleck, of Minnesota, Pat Fitzgerald, of Northwestern, and Jim Harbaugh, of Michigan, are scheduled to speak during the coach’s portion of the Media Days.

Fleck has obvious ties to Western Michigan. I do not think either myself or Rodriquez believed he could pull off the same thing with the Gophers. Fleck has taken a Minnesota program that was already on the rise and made the Gophers even better. They certainly will be a factor in this year’s Big Ten championship race.

I am hoping to get a few moments with Fitzgerald during the individual podium session. Not only is he one of the most entertaining Big Ten coaches to talk to, but I have a few questions about former Edwardsburg standout Josh Priebe, who will be a sophomore this season with the Wildcats.

Priebe saw a lot of action last season. I am thinking there is a good chance he would be starting for Northwestern this season. I cannot wait to see what Fitzgerald has to say about the former Eddie.

Harbaugh will once again be a main focus of attention at Media Days – whether he deserves all that attention is up for debate. What I do know is that there are going to be a lot of questions about whether or not he can finally turn the Wolverines into a consistent winner and a national powerhouse once again.

Day two is not as exciting, but this will be my first chance to hear Michigan State Coach Mel Tucker speak to the media. He replaced Mark Dantonio since the last time I attended Media Days.

Amelio is going to be most interested in hearing Indiana Coach Tom Allen speak. Being the big Hoosier fan that he is, I know he is looking forward to seeing if Indiana can continue to build on its recent success and be a player in the Big Ten chase in 2021.

In our two previous trips to Big Ten Media Days, we opened the day with former Ohio State Coach Urban Meyer having to discuss a scandal that broke just prior to the start of the two-day affair. I am pretty sure Ryan Day will not have to deal with the same situation on Friday as he wraps up the press conferences with the coaches.

Thursday morning cannot get here fast enough. Talking college football for two days in July gets me revved up for the season. It also is like an alarm clock letting me know that high school sports are just around the corner with fall practices set to begin the second week of August.

Let us kick off the 2021 fall season at Lucas Oil Stadium and follow that up with a steady diet of high school sports. Before we know it, there will be a crispness to the air, and we will be pulling out the sweatshirts and heading off to our favorite fall athletic events.

NILES — The first of two weekends for the Niles City Golf Tournament is in the books. The Youth Division,... read more