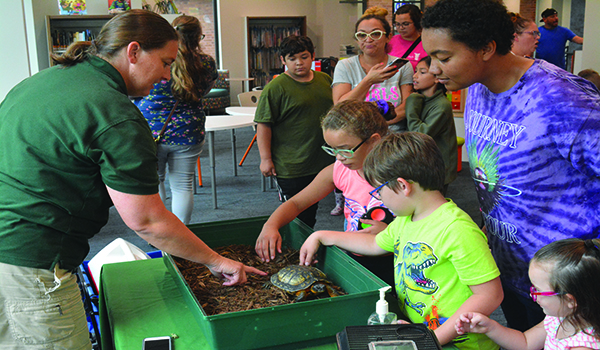 DOWAGIAC — The Dowagiac District Library features many books about animals. On Friday and Saturday, some of those animals were on hand for all to see.

The library partnered with the Dowagiac Conservation Club to host a Zoo Animal Meet and Greet as a part of Dowagiac’s annual Summer In The City festival.

The meet and greets featured an assortment of animals from the John Ball Zoo in Grand Rapids. Children were able to meet the animals and ask animal expert Rhiannon Mulligan questions.

According to Melissa Phillips, Youth Services Coordinator for the DDL, the event attracted more than 330 visitors to the youth area of the library, where the event was held.

“It was a huge success,” She said. “We’ve had so many new card applications the last few days. I’m glad that it’s been such a success for the library and it’s great for [The Dowagiac Conservation Club], too. Sometimes it’s a challenge for them to get new kids aware of what they do. This is a good way to get their name out there and bring nature to kids.

“With this event being educational, it made perfect sense to have it here at the library.”

As the education programs manager for the John Ball Zoo, Mulligan hosts zoo tours and travels to schools across the state educating children about the wonders of the animal kingdom.

When she received a call from the Dowagiac District Library about having a zoo animal ‘meet and greet’ at the library, she couldn’t say no.

After all, she is a Dowagiac native.

“I grew up here,” She said. “It’s really fun and exciting to come back home and it was great to see a lot of kids and just share some different animals that they might not be able to see up close very often.”

“She usually doesn’t go out and do this,” Phillips said. “But when she saw a request coming from Dowagiac, she took it. I thought it was pretty cool, a ‘back to your roots’ kind of thing.”

After graduating from Dowagiac Union High School, Mulligan attended Michigan State University, where she earned her Bachelor’s degree in Zoology. She began working at the John Ball Zoo in 2006 and became the zoo’s education programs manager in 2011.

“I love seeing the kids excited to see the animals,” She said. “A lot of adults are nervous around animals but kids are just generally curious. It’s a good opportunity to get them closer with animals, interacting with animals and realizing that nature is really cool to be around.”

The meet and greet gave Mulligan the opportunity to check out the new-look library for the first time.