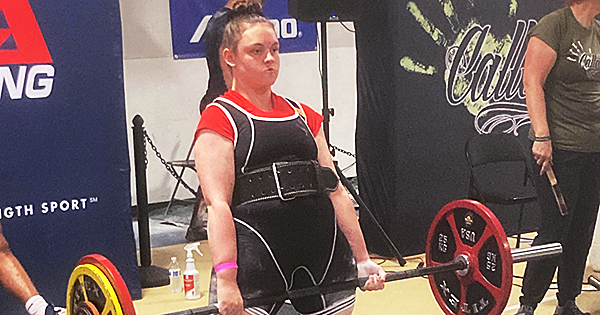 Highlights from the lifters include standout performances by four who qualified for USAPL High School Teenage Nationals and two who set USAPL Michigan State records.

Paul Hess III won the Teen 1, 74-kilogram division with a total weight of over 1,000 pounds. Hess set state records in the squat, the bench press, and a three-lift total state record.

Hess attempted a deadlift state record on his final lift, but just fell short. He qualified for both Raw Teen and Raw High School Nationals. Hess will be playing football at Niles High School and plays Old School Baseball, along with older brother Colin Hess.

Colin Hess won the Teen 2, 83-kilogram division with a total weight of nearly 1,100 pounds. Colin had some tough competition as he led throughout the squat and bench press.

Colin was pushed until the last deadlift where he forced the runner-up lifter to attempt a weight he couldn’t lift. Colin qualified for both Raw Teen and Raw High School Nationals. Colin plays football at Niles High School. Colin and Paul III are the sons of Paul II and Erin Hess, coaches for Midwest Power. Paul II was a former powerlifting athlete at Niles.

The team is also coached by Demetrius Burt, who is a graduate of Brandywine, and a trainer at the Midwest Performance Academy.

Elizabeth Michelakis won the Teen 1, 84-kilogram Equipped division. Michelakis set state records in the bench press and the deadlift, as well as a three-lift total state record. She has qualified for Equipped Teenage Nationals and has now won eight USA Powerlifting meets (four in Michigan and four in Ohio). Her older sister Emily Michelakis was a two-time USAPL meet winner in Michigan. Elizabeth’s dad Mike Michelakis (advisor for Midwest Power) was the longtime health teacher and strength coach at Niles High School.

Emma Strefling won the Teen 3, 84-kilogram division. Strefling is a graduate of Edwardsburg High School and will be playing college volleyball at St. Rose in Albany, New York. Strefling’s older sister Frankie Strefling was a standout volleyball player at Buchanan High School and plays at Eastern Michigan. Her dad Vince Strefling, owner of the Midwest Performance Academy, was a longtime high school volleyball coach at several schools in Michiana, and coaches at Glen Oak Community College.

Jacob Iwaniuk won the Youth 3, 53-kilogram division. Iwaniuk was the youngest competitor in the competition. He attends Niles Schools and plays youth hockey. His uncle Justin Iwaniuk was a former powerlifting athlete at Niles High School.

Vernon Riggins won the Teen 1, 53-kilogram division. Riggins had stiff competition throughout the meet from his teammate Brady Baker. Vernon was able to pull away with a big deadlift of over 210 pounds. Riggins attends Edwardsburg schools and competes in wrestling.

Baker finished runner up in the Teen 1, 53-kilogram division. Baker was the smallest competitor in the competition. Baker goes to Edwardsburg schools and travels nationally for wrestling tournaments throughout the country.

Jeffrey Thomas finished runner up in the Teen 2, 120-kilogram division. Thomas had a great performance on the day despite having tough competition. Thomas goes to Brandywine High School and also plays basketball.

Sarah Hosinski, the lone adult lifter for the Midwest Power youth team, finished runner-up in the Open, 63-kilogram division. Hosinski had a loaded division but went 9-for-9 on the day to outlast most of her competition. Sarah played college volleyball at St. Francis and attends PT school in Ft. Wayne, Indiana.

Chase Brawley was scheduled to compete, but was unable to do so due to an injury from a wrestling tournament earlier this summer. Chase plans to return to competition when healthy. He is a student-athlete at Cassopolis schools and plans to play football. His dad Matt Brawley was a three-sport athlete at Niles, played collegiately at Olivet, and was the athletic at Cass and Glen Oaks before accepting the same role at Niles.

A couple of adult local athletes did well on the day.

This was also a homecoming of sorts for Jeremy Mutchler, a Niles High School graduate, who now trains the Kalamazoo Strength team from Warrior Training systems. He coached his team to the adult team award at the Midwest Performance Championship.