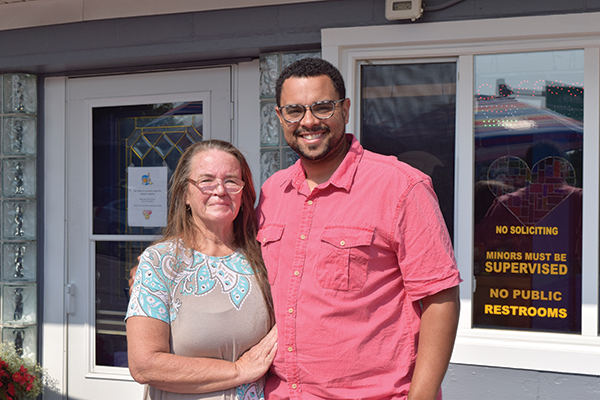 NILES – John Boston II’s 39th birthday was special, as it was the first he spent with his biological mother and adopted parents together.
The union, as Boston called it, as they had not been together before, was just over a year in the works from when he first contacted his biological mother, Janet Simmons. He worked with Facebook group “Search Angels” to help track down members of his biological family, as he was given up for adoption as a baby.
After navigating the awkwardness of reaching out to a stranger to confirm personal details, Boston and Simmons connected.
“I thought it was some sort of prank. He went about with more information. I told him I had lost a son during that time, and he’s like ‘what do you mean you lost a son?’” Simmons said. “I said, I had to give him up to protect him.”
Simmons said her emotions were high, as she told her other biological son that she thought his brother had found them.
“We did the DNA test later to confirm, but we connected and we had been talking and building connections,” Boston said.
The meeting is a best-case scenario for the family. He had helped another family member locate their biological parent, and the outcome was not as happy.
“Sometimes it’s knowledge. Sometimes it’s beautiful,” Boston said.
When he began speaking with Simmons, he found that she had been separated from her sisters for 50 years. Because he was already plugged into the search process, he worked to help find her family as well. Some connections did not respond, but eventually, Boston tracked down Simmons’ two sisters.
“We connected everyone,” Simmons said. “Everything about the story is not beautiful. Mom [Simmons] was in an abusive relationship at the time, and that’s why she was trying to protect me.”
Boston, who lives in Niles, was the centrally located member for a big family reunion over the last weekend, after he helped connect Simmons with one sister, and the daughters of another. One of Simmons’ sisters passed away in 2019.
Some of Simmons’ family ended up in the Upper Peninsula, while she moved to Tennessee.
Simmons is proud of the person Boston has become. She also loves that he calls her “mom,” too.
“I respect that. I love his parents. I’m grateful for his parents. He has wonderful people around him,” Simmons said. “He’s an amazing young man. He’s got a beautiful family of his own. He’s an assistant professor and a North American evangelist. He’s just an amazing young man.”
She recalled praying for Boston as she held him, before giving him up for adoption, that God would protect him.
“I mourned all these years. I really hurt, but I knew I was doing the best thing to protect him,” she said.
Throughout the years, the two were not always very far from one another — they just never knew. They both continued to live in Florida for years after Boston was born, and then they were a mere hour apart when he completed his undergraduate program.
Boston recognized the impact of being united with his biological mother in 2020.
“When we met, there’s been so much racial and political divide in our country,” Boston said.
He, his wife, Karla, and daughter, Riley, had resided in Australia for work before returning to the U.S.
“To come back into an environment racially and politically charged, to meet my biological, Caucasian family — there was none of that,” Boston said. “There was no difficulty in trying to figure out the black and white side of it. It was just family. I was accepted. It was quite beautiful. It touched a lot of hearts and lives.”
The impact of finding one another will stay with Boston and Simmons, as they continue to stay in contact and spend time together. The connection has already grown to be a part of their daily lives.
“It’s like everybody has known each other forever. We’re just already connected,” Karla said. “We have a family group chat and we talk every day, all day, about whatever random thing happens.”
For Simmons, making it through 2020 to unite with her son was a bright change in her life.
“We went through a pandemic that tore a lot of people up. I lost my mother-in-law to COVID. We had COVID,” she said. “But during that entire pandemic, we were also blessed with my son, and him finding my sisters. It was a negative side to life and a brighter side.”

NILES – The Niles-Benton Harbor Metropolitan Statistical Area will remain in place until more research is done by the U.S.... read more