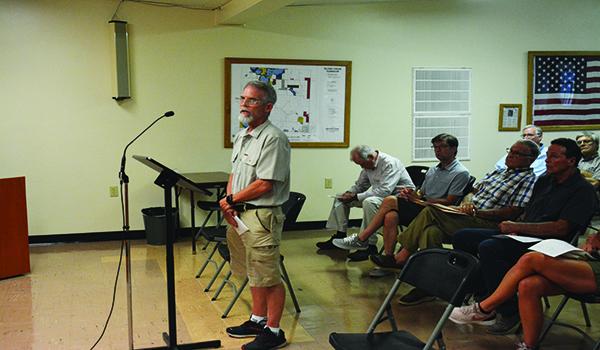 SISTER LAKES — Community members from Sister Lakes and beyond were on hand for Wednesday’s Silver Creek Township board meeting to voice their support for Hidden Acres Safe Haven, 50582 Pleasant St., Dowagiac.

The nonprofit organization continues its fight to stay open after a May visit from the Silver Creek Township Building and Zoning Administration determined that the facility has more animals than the traditional zoning laws allow.

Community members took the podium to advocate for the farm, which has provided homes for unwanted and special needs livestock since opening in 2017. The shelter works closely with local 4-H organizations and hosts popular events including goat yoga and Trunk or Treat.

The loss of the shelter would be a major blow to the community, which has relied on the shelter for livestock assistance, spay and neuter clinics for cats, cat adoptions as well as educational programming.

“My daughter has benefitted greatly from Hidden Acres,” said Scott Bourdon, whose severely impaired daughter visits the farm twice per week. “Never could we have found a dream together for our daughter to work with the animals and to be accepted by everyone at Hidden Acres. When I told my friends that we found the dream job for my daughter, they pinched me. We appreciate it greatly. When we heard there were issues and and people needed to speak up, I wanted to speak for my daughter and with all our best wishes, we hope that Hidden Acres continues.”

Dawn East and Heather Matthews of Hidden Acres were grateful for the support they’ve received from the community.

East, who owns the property Hidden Acres resides on, recently met with township officials to turn in certification.

“We told them what we knew at that point,” East said. “We had all the coordinates highlighted and documented by the attorney general, all the different articles we found with help from a wonderful person who is an inclusive researcher.”

According to East, the township’s officials will take a few weeks to evaluate the situation before making a decision.

“They said the decision could be made in three ways,” she said. “One of them could be in favor of us under the Right To Farm Act. The other ways could be that we might have to make some modifications or they may say absolutely not. We’re just waiting to hear back for now. Once we know what they’re going to say, we’ll know what direction to move forward with.”

The wait has been taxing on East and Matthews, who can’t afford to move forward on essential projects until the township makes a decision.

“We have work that needs to be done but we’re not going to spend the money to do it until we find out what their decision is,” Matthews said. “Our fencing got knocked down behind the barn from a recent storm. We’re not going to install the panneling that needs to go back there to keep the baby goats in because it’s $75 a panel. If we can’t stay there, why spend the money? We need a lot of repairs that we aren’t doing right now because we don’t know what’s going on.”

In the event that the township moves to shut down Hidden Acres, East said they have looked into purchasing property for relocation that is in compliance with the zoning administration but hopes that it does come to that.

“It would be difficult to do so,” East said. “As a small farm and a nonprofit, that’s a big ask.”

While the wait continues, East and Matthews are hopeful that the board will see Hidden Acres as an asset the community can’t afford to lose.

“They’ve only seen a little tip of the iceberg of our supporters,” East said.

“There’s no need to shut us down,” Matthews said. “This is something for everyone in the community. This is an experience for children who would not get to have this experience without us.”

DOWAGIAC — A historic park is sporting a new look in downtown Dowagiac. The redeveloped Beckwith Park made its debut... read more