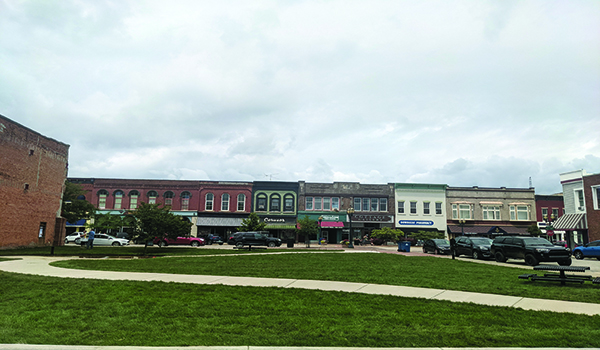 DOWAGIAC — A historic park is sporting a new look in downtown Dowagiac.

The redeveloped Beckwith Park made its debut Wednesday, just in time for Summer In The City.

While not yet complete with all of its bells and whistles, the park space will be ready for full use by festival goers and community members alike.

“It’s not completely finished,” said City Manager Executive Secretary Bobbie Jo Hartline, who has been working with local contractors to ensure the completion of the project. “There’s much more to come. But with Summer In The City and the upcoming Open Header Cruise, we didn’t want anyone to have to look at a construction zone. It will be usable and it will be welcoming.”

“We think it’s a real positive,” said City Manager Kevin Anderson. “We’ve had that park idle for a while and we’re anxious to get it back and put in public use. It’s a good gathering place and it will be good to show the community we’re getting close to completion. It should be a really nice addition to the event.”

The city’s long-term plan to renovate and improve the condition of Beckwith Park began with the removal of the long standing gazebo in June 2018.

Lounsbury Excavating was responsible for improvements to the park, which include the compaction of soils, installation of sod, adding four parking stalls and adding benches and tables while retaining open space for larger gatherings and community events.

The next phase of development will see the return of the memorial bricks to the patio, a fire pit with setting around it, more trees and the relocation of public art to the park.

The bricks were installed for a short time before being taken out again due to corrections needing to be made. Hartline said the bricks would be installed once the problem has been solved.

“The patio will be the new home to the commemorative bricks,” She said. “It was going really well but quality issues crept in. We wanted to make it right so it was just better to bring them back up, get it taken care of and get them laid back down.”

Originally housing 1st Source Bank and later Art ‘Enah Suit, the building was removed by the city of Dowagiac to incorporate that space into the redevelopment of Beckwith Park.

The building had been vacant since Art Enuh Suit moved to its current location at 115 S. Front St. in November 2019.

Built in 1893 to honor Round Oak Furnace Company founder P.D. Beckwith, the Beckwith Theatre was considered by local newspaper reports to be the finest theatre between Chicago and Detroit, having hosted performers such as singer Lillian Russel and composer John Phillip Sousa.

According to Dowagiac Area History Museum Director Steve Arseneau, the theatre was demolished in 1966. Beckwith Park was built on the grounds of the former theatre, which was filled with trip hazards, settling ground and safety concerns.

“The owners decided to tear it down and when they tore it down, they just pushed a lot of the rubble right down into this space,” Arseneau said. “That is what has been causing the settling issues over the last 50 years. Every time the city has done something here, eventually over time, the ground beneath begins to settle.”

“We know the park has some age issues,” Hartline said. “Construction back then was done differently than people would do now. In the redevelopment of the park, we had to keep that in mind.”

“We kept the layout of the park in mind knowing that we have a new section and an old section,” She said. “We have plans in place that in 50 years, as things change, we’ll know how to address those changes.”

After demolishing the building, town officials discovered the original Beckwith Theatre wall was present on the newly exposed side of the former Round Oak Revisited restaurant that now faces the park.

“When they took down the building, it exposed some of the original structure,” Arseneau said. “When they tore down the Beckwith theatre, they didn’t take down that wall. That’s actually the old Beckwith Theatre wall.”

The museum will install a historical plaque in the park within the next few months, Arseneau said.

“It’s going to be about P.D. Beckwith and the history of this site,” he said. “It’s a really neat site. The Beckwith Theatre was probably the most architecturally significant building in the history of Dowagiac. It really was a unique structure.”

Like the old Beckwith Theatre was decades before it, Hartline sees Beckwith Park being a trendy location where people can socialize in the heart of the city.

“You hear so much about ‘returning to normal’,” Hartline said. “We all get to pick what part of normal we want to keep and maybe some of the baggage that dragged us down this past year doesn’t need to be kept. I think Beckwith Park is one of those things that people will be excited to come back to and experience and spend some time in.

“There are many couples who had wedding or graduation photos taken here and I see that coming back. The new Schuur Park has seen a lot of traffic and the new steps of the (Dowagiac District Library) are so inviting. We want the sidewalk here in the park to be just as inviting as those big beautiful majestic steps at the district library. I think that this will be a very comfortable place to have lunch and a fun place to meet friends. It will be a celebratory place for festivals. “We just hope that whatever you need it to be, it will be that for you.”

Fair guests in for a treat with main grounds entertainment

Inaugural LIVESTRONG at the YMCA 5K to take place Aug. 7