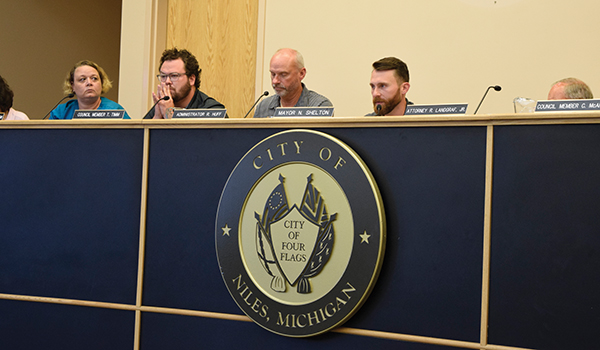 NILES – Monday, the Niles City Council met back in its chambers for the first time since the arrival of the COVID-29 pandemic last March. The council members and around 20 community members joined the meeting on Monday evening.
During the meeting, the council voted to adopt the City of Niles’ Five-Year Master Plan and heard from residents displeased with the increased visibility of cannabis in the community.

The chair of the Niles Planning Commission, Rodrigo Correa, spoke to the council during the public hearing for final comments on the master plan.

“This is a very exciting time and a momentous occasion for all of us because this is work that started in 2016,” Correa said. “We are really excited because a lot of work by many people have gone into this over the last two years to get this before this body, for you to review it and consider approving it, to allow us to enter the next phase of our evolution here in Niles.”

Correa said the plan would help create an environment and community where people can live, have recreation and be able to find work.

“If this is approved, we can continue to zoning to make a little better sense as to how our city is mapped out, which is really exciting,” Correa said.

The council approved the City of Niles Five-Year Master Plan in a unanimous vote.

In other business, two Niles residents spoke to the council members to voice their disagreement with marijuana in the community.

“I’m here to talk about the marijuana celebration,” said Art Kelly. “I got [information] from a pastor that said celebrating that contributes to the destruction of individuals, families and children.”

He read information to the council about his concerns regarding an increase in traffic crashes and suicides and attributed the cause to cannabis use.

Another resident, Madalyn Crocker-Alford, spoke of her concern as a resident of Niles for over 80 years.

“I have never seen such a mess as what it’s turned into now. At a luncheon yesterday with senior citizens, there was not one person who would back what you’re doing now,” Crocker-Alford said. “Marijuana is not helping us.”

She referenced an increase in hunger, and advertisements for gambling and marijuana. She also referenced her disagreement with the Niles social district, which will allow adults 21 years of age and older purchase alcoholic beverages to consume from approved businesses in downtown Niles while they shop or attend events.

“Who wants to take their children out and watch some drunk go up and down the streets?” she said.

At the end of the meeting, council member John DiCostanzo thanked the two residents for sharing their opinions.

“I respect your opinions. I understand your feelings on the matter. I would like to remind you that the state passed two ballot propositions – one to legalize medical marijuana and several years later to legalized recreational marijuana,” he said. “They both passed by a large majority. To look at us and blame us for whatever you think it ill with this problem – it’s something that the state wanted.”

DiCostanzo said the city had hosted town hall meetings and taken into consideration the views that were expressed.

“We had quite a demand within the city for us to permit marijuana sales within the city. We could have used our own personal opinions and denied that, but it was really a request from the people of the community to enable this and to regulate it,” he said.

He said he had been waiting for a larger show of disagreement with the passage of the local allowances, but that the decision was made on the matter about three years ago.

“Alcohol has been on sale for a long time. There are issues, and society learns to deal with them,” DiCostanzo said. “I think, with marijuana, it’s going to be the same thing.”

NILES – This weekend, the area in front of the Niles Amphitheater was filled with dancers meeting with one another... read more