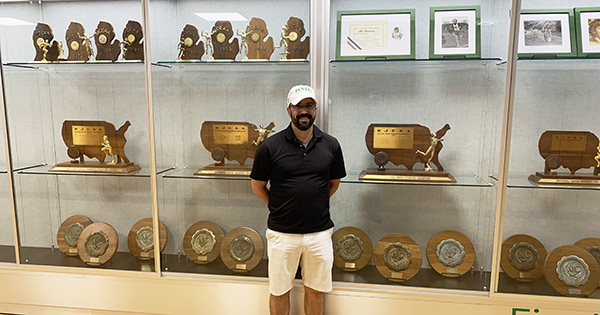 SMC Cross Country Coach Zachary Sartori knows what he is looking for in building the Roadrunner program. (Leader photo/SCOTT NOVAK)

DOWAGIAC — When Southwestern Michigan College had to find a new cross country coach just months after hiring its coach to restart the program after a 25-year absence, the school found someone who knows exactly what it will take to build a winner.

Zachary Sartori officially became the Roadrunners’ head coach June 1. He replaced Juris A. Silenieks, who was hired in October 2020, but resigned at the end of March for family reasons.

Sartori, a former college runner himself at the University of Arkansas-Fayetteville and Loyola University-Chicago, has coaching experience at several levels, including the College of DuPage, where he helped lead the junior college program to its best results in school history.

The College of DuPage finished at the National Junior College Athletic Association Division I Regional runner-up in 2019. The College of DuPage also went from no national qualifiers to seven in his first season there. Sartori coached three NJCAA All-Americans, so he knows what to look for in a runner.

Sartori said that he had been looking for a head coaching position for eight years, so when the opportunity at Southwestern Michigan College presented itself, he did not think twice about applying.

“When I saw the announcement on the NCAA marketplace, I jumped at it,” he said. “it is a good spot. It is close to home.”

At the College of DuPage, there were not enough men to score as a team when he arrived.

“When I first got there, I went out and rounded up a few athletes that I saw running around the track, and said, ‘hey, come on out. Get out here and join the team, so we can have a full team and compete,’’ he said. “With the ladies, we had a couple of gals who have been recruited, but for the most part it was young ladies who just wanted to run a little bit in college and didn’t really have a lot of competitiveness in them.”

Sartori instilled that competitive spirit in the runners and the program took off from there.

Since he was hired in May, Sartori realized that he was behind in getting the program built.

“The main focus day one, is finding some female athletes to fill out our women’s roster,” he said. “If that means scraping the barrel here on campus to find anyone who has competed in anything in high school like soccer, volleyball or whatever, we need to get them out to train and have a team that we can compete with. I have some connections back home in Lockport (Illinois) and the Chicagoland area I can reach out to and hopefully find a few young women who have not made a full commitment anywhere or maybe just decided to do the junior college thing. Maybe we can entice them out this way.”

Sartori had taken a look at the runners that have already signed to compete for the Roadrunners. He likes what he sees.

“I am actually really excited, especially on the guy’s side, there is a ton of potential there to be successful,” he said. “Are we going to be competing against the D1 level top tier teams this year? Probably not. But we are going to be competitive in the next few years.”