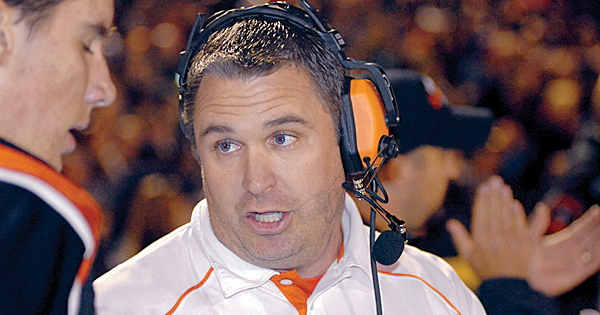 Stanger, who was 101-61 with 11 playoff appearances at Dowagiac in 16 seasons, retired following the 2018 season to spend more time with his family. The Chieftains captured the Division 5 district championship in 2011.

“It just kind of happened,” Stanger said. “Dylan Patterson their athletic director contacted me and asked if I might be interested. I told him I would be more than happy to do that, and that sort of got the ball rolling. He called at the end of March and the beginning of April.”

Stanger went through a lengthy interview process that included Zoom meetings, in-person meetings and even coaching a practice with several current players.

“The practice with players went well,” he said. “I felt I had a good rapport with them. I went through those steps, and they came back and offered the job.”

Stanger said there were a couple of jobs that were interesting to him, like Lakeshore and Portage Northern, mainly because they were bigger schools that would present a challenge for him.

Stanger is no stranger to the SMAC, as Dowagiac was a member of the league prior to moving to the Wolverine Conference. He will be taking over a Maroon Giants program that has struggled in recent years but has a rich football tradition.

“When I came to Dowagiac, it was established program with a tradition and success,” he said. “This is a different challenge for me to have an opportunity to build consistent success.”

Stanger replaces Carlton Brewster, who was 11-15 in three seasons at Kalamazoo Central. Brewster left the Maroon Giants program to take over at Wyoming High School.

Stanger will not be the only familiar face on the Kalamazoo Central sideline for Chieftain fans. Former Dowagiac players Jamin Hunt, Dontrell Tucker, Sam Courtney, Matt MacQuillan and Mark Howkins will be assistant coaches.

“It is a good mix,” Stanger said. “It is a pretty good blend of coaches.”

NILES — Leader Publications has welcomed two new marketing professionals to its team. Jennifer Bounds, who has been with Leader... read more