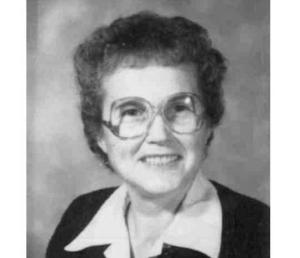 Judy was born in Lansing, Michigan, during a snowstorm, to Winifred Johnson and Norman P. Kellogg. She grew up in Cassopolis and graduated from Cassopolis High School in 1950 as salutatorian. She attended Western Michigan University, Michigan State University, and Andrew’s University.

In September 1953, she married Richard H. Richter in Cassopolis. While Richard served in the Air Force in Madison, Wisconsin, their daughter, Jennifer was born. After discharge from the service, they moved to Cassopolis where, Steven, Timothy, and David were born.

They raised their family in Niles where Judy was a stay-at-home Mom, school librarian, and subsequently a school secretary retiring in 1988.

Judy was a skilled quilter, bridge player, lover of classical music, gardener, amazing cook and baker, 57-year member of First Presbyterian Church, great neighbor, and wonderful mother and wife. She loved traveling and did so to almost every state of the union, South America, Canada, and Europe; she spent winters in Alabama in her retirement years. Above all, her greatest joy was family.

She is survived by her husband of nearly 68 years, Richard; children, Jennifer (Pat), Steven, Timothy, and David (Sharon); grandchildren, Emily, Colleen, Alexis, Will, Lauren, and Julia; great-grandchildren, Mason, Drew, Grant and Lincoln; brother, Thomas; and many nieces and nephews. She was predeceased by her sister, Sheila; brothers, Norman, Freeborn, and Schulyer.

Memorial contributions may be made to The Foundation of The First Presbyterian Church of Niles or Caring Circle Hospice.

A memorial service will be held at a later date.

Jesse Cesavice, 37, of Niles, passed away on Tuesday, June 22, 2021. Arrangements are pending and have been entrusted with... read more