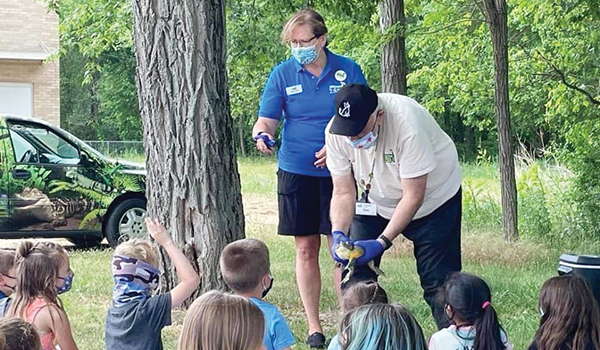 DOWAGIAC — A local organization will be giving the Dowagiac youth opportunities to explore the wonders of the animal kingdom in a safe environment.

The event will take place from 2 to 4 p.m. Friday and noon to 2 p.m. Saturday and will feature an assortment of animals from the John Ball Park Zoo in Kalamazoo. Children will be able to meet the animals and ask the animal experts questions.

These events are made possible due to the funds raised through the club’s Dowagiac Youth Fund, which supports youth programs including hunter’s safety courses, archery classes and summer camps.

For club member and Dowagiac Youth Fund chair Stephanie Lyons, partnering with the library to bring awareness to wildlife and outdoor activities was an ideal way to engage the community.

“We were trying to figure out how to present this stuff to the community and that’s how we linked up with the library,” Stephanie Lyons said. “We tied it into Summer in The City, and that’s a good way to get this stuff out to everybody in the community. We could host events here at the club but we have this beautiful new library space in the heart of downtown. We want kids to be off their tablets, off video games and thinking about nature and the outdoors, while at the same thinking about reading a book. It’s a great opportunity to go to the library and see what the library has to offer.

“If someone doesn’t follow us on Facebook or if the paper isn’t talking about it, they might not know if we’re doing something whereas the library has a huge following.”

“A lot of people think of the Dowagiac Conservation Club as the shooting range in town,” added club member Craig Lyons. “They don’t necessarily see all the stuff we do for the local youth. Things tend to fly under the radar, so it’s nice to be able to get this stuff actually out into the public where people can see.”

For its first youth activity of the year, the club sent the Potawatomi Zoo to kindergarten and first grade classrooms at each of Dowagiac Union Schools’ four elementary schools. Each class got a presentation outside where they were able to see animals and ask zoo volunteers questions.

“The kids were able to go and sit around a zoo volunteer who came with live animals,” Stephanie Lyons said. “The volunteers talked to the kids about the animals and the kids were able to interact and get really close to the animals. It was something kids were able to do in the absence of field trips this year. There were no fun end of the year activities, so we decided we would bring the field trip to them. We reached out to all four schools and had a great response from the teachers saying the kids will love this program.”

The club’s introductory archery program began on June 13 with remaining dates of July 11, Aug. 1, Aug. 15 and Sept. 12. The free lessons run from 10 a.m. to noon at the club on those days and are for beginners ages 12 and up. All equipment will be provided on-site and participants must be accompanied by an adult.

“We show kids that have never done it before or interested in it the ropes to get them started in it,” said event organizer Adam Maxey. “We offer this activity for them to come in and gain exposure to something that they might end up enjoying and want to pursue further.”

The DCC is putting together an equipment donation for Fitch Camp, 50600 Fitch Road, Dowagiac as well as some nature kits to donate to the library. The club is also putting together “camp-to-go” packets that will provide some information and projects for kids to do this summer.  Stephanie Lyons said the club is hoping to distribute the packets in early August.

“Last year, we gave kids a butterfly house where they could watch the butterfly go through its metamorphosis,” she said. “We had bat houses they could build and put up their yards for the bats and learned why bats are important to have around. This year, we’re trying to do something a little bit different but still along the same lines.”

DOWAGIAC — There is a new sport on the block at Dowagiac Middle School, and students are taking notice. DMS... read more