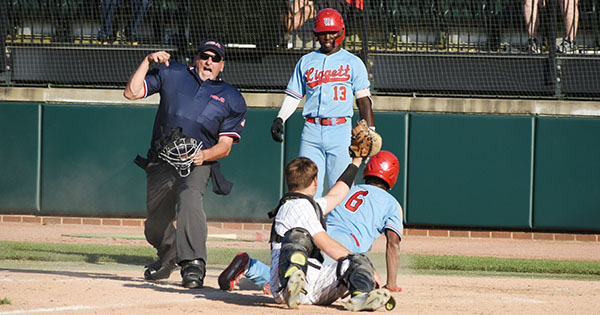 EAST LANSING — A two-run first inning was all No. 2-ranked Grosse Pointe University Liggett needed to eliminate No. 1-ranked Buchanan in the Division 3 baseball semifinals at Michigan State University Thursday.

University Liggett scored its two runs on a lead-off walk, a sacrifice bunt and a pair of singles to score the game’s only runs in its 2-0 win over the Bucks, who end their title run with a 34-3 record.

Liggett (30-5) advances to Saturday’s Division 3 championship game against Traverse City St. Francis, which defeated Richmond 5-4 in the other semifinal Thursday. St. Francis let a 3-1 lead get away before rallying to the victory.

After scoring their two runs, the Knights turned the game over to pitcher Kurt Barr and its defense. Both were up to the challenge as Barr tossed a two-hitter with nine strikeouts.

“I’m proud of the way we competed,” said Buchanan Coach Jim Brawley. “This is a working group. They come to work every day. That’s what I love about them. These kids are working jobs, and then they come to practice. I love these kids.”

Buchanan starter Matt Hoover did not get off to the best start, which allowed Liggett to get on the scoreboard, so did a couple of close calls that did not go the Bucks’ way, including a pickoff play and a stolen base. Both times, Buchanan thought it had picked up an out, but Brawley would not use that as an excuse.

Another close call came when Keegan Pelley was trying to stretch a double into a triple in the fifth inning. In a bang, bang play, Pelley was called out by the home plate umpire who came up the line to make the call.

“We thought he was safe,” Brawley said. “But those things happen in a game.”

Deagan Huffman had the other hit for the Bucks, who had their 20-game winning streak snapped. Hoover tossed a three-hitter with five strikeouts. He ends the year with a 9-1 record on the mound.

Buchanan was in search of its second state championship. The Bucks won the 1985 title under former Head Coach Bob Storm. Former Head Coach Lonnie Hoover, an assistant on this year’s team, took the Bucks to the Final Four in 2015.

EAST LANSING — A two-run top half of the first inning was enough for the University of Liggett to defeat... read more