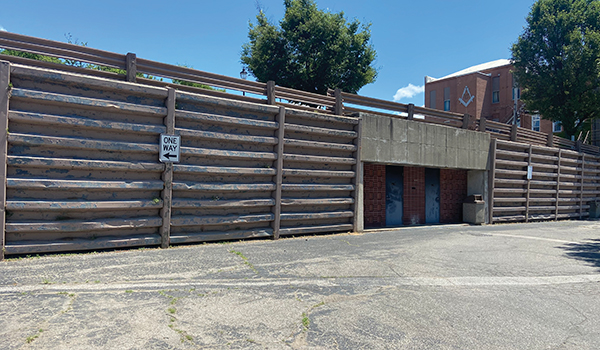 NILES – A new mural will soon change the scenery of the parking lot at the corner of N. Second and Sycamore streets in downtown Niles.

During Monday’s Niles City Council meeting, council member Jessica Nelson, who is the council liaison for the Niles Public Arts Commission, presented the idea of the mural and a motion to allow the painting to begin.

“[The Niles Public Arts Commission] met last week, and they are a very active bunch. Amongst other things, they are working on to get public art in Niles, they approved the painting and design of a mural,” Nelson said. “I know the artist is itching to get started.”

The mural was previously approved by both the NPAC and the Niles Downtown Development Authority, and needed final approval by the city council to have the artist begin.

The mural will be painted by Russell “Pain” Corrado, partner and owner of Order and Chaos Tattoo Emporium, 116 S. 11th St., Niles.

For Corrado, the process has been about a year in the works.

“[My family] saw some graffiti under the bridge [at the park]. I walk my kids down there. I used to spray paint and tag everything, illegally. I told [Lisa Croteau] I could paint over it,” Corrado said. “I sent her an outline drawing. She decided it was too nice to go under the bridge.”

Corrado will be using two different types of paint as he creates the artwork.

“Spray paint will get the shading and textures, and the hand-painting will be done to detail it,” he said.

For now, the painting will span the corrugated wall of the parking lot. Corrado said, for this piece, he will be painting the visible vertical portions of the wall. In the future, he may go back and add in the tops and bottoms of the corrugation, so when viewed at a different angle, a different image would be viewed.

The design includes Niles landmarks and history, including the water tower, the Niles city flag, and the Chapin Mansion.

“The artist has put some thought into building us something beautiful, because it’s not very beautiful down there,” Nelson said.

During the discussion of the mural’s design and approval, council member John DiCostanzo raised some concerns about the content of the mural. He wanted to ensure it was a “depiction of actual historical record of Niles, and not a revisionist historical rendering.”

Corrado is donating his labor to the mural.

City Administrator Ric Huff said there may be some expense to the city’s general fund, if the impact fund will not cover the cost of supplies. He said there was a lot of labor involved, including scraping down the peeling paint, priming the wall and painting it.
“I think there’s a lot to be gained here by letting this happen,” Huff said.

The NPAC is appointed by the Niles City Council, and the latest work was approved by the commission.

After discussion, the mural was approved unanimously by the council.

Corrado said he is aiming to begin working on the mural on Monday, June 21.

NILES – The current is moving right along at the Dowagiac River restoration project, where the Pucker Street Dam once... read more