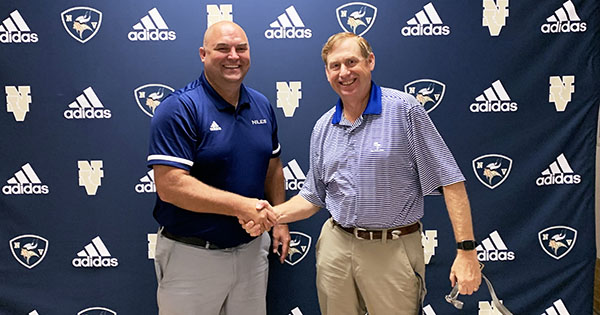 Brawley was ecstatic to be returning to Niles, as was Upton to have a former Viking take over the role of athletic director.

“I have been out of here since 2000, and I could not wait to get back,” Brawley said about returning to the city where he was born and raised. “Finally, the opportunity came where it was the right fit. I am very thankful to come back home.”

He held numerous positions at Ross Beatty Jr./Sr. High School since he started there in 2005. He was a special education, health and physical education teacher, dean of students and athletic director. He was the assistant principal and principal in Cassopolis from July 2019 until he accepted the athletic director position at Glen Oaks Community College for the 2020-21 season.

Brawley, a Class of 2000 Niles graduate, is no stranger to athletics, having been a three-sport athlete for the Vikings. He also played collegiate basketball for the Comets.

He is also no stranger to coaching, as he has been on the sidelines in football, baseball and basketball, having coached at a variety of levels.

Earlier in the week, Niles announced that another alum, Myles Busby, would be taking over the boys basketball program after three years as an assistant coach.

“Matt and Myles bring experience and passion for Niles Athletics,” said Dr. Dan Applegate, superintendent. “Together, they will motivate our students, both on and off the court, as they understand that athletics and academics go hand in hand and will provide mentorship, motivation and support for our student-athletes.”

Upton has been on the Niles AD for 10 years. He helped Niles move from the SMAC to the BCS Athletic Conference before ultimately achieving the goal of joining the Wolverine Conference and bringing the Niles-Dowagiac football rivalry back onto the field.

“Our athletics program is in good hands, and we thank Jeff Upton for his service to our school and community over the past decade,” Applegate said. “We look forward to another successful year of athletics for the 2021-22 school year.”

Brawley said that Upton is leaving the athletic department in great shape, and he will pick up the reigns and carry it forward.

“Everything is new,” he said. “I am excited for what the future holds for Niles athletics, I really am. My family has been playing sports with the kids that are coming. I know the talent that’s here, and I am very excited for it.”

Upton said he was excited when he learned of the district’s decision to hire Brawley.

“Matt Brawley brings Niles history, and he has a charisma that carries over and will be passed on to the kids,” Upton said. “The excitement about athletics and education at Niles will continue, and that is fantastic. For me to step aside for Matt, I mean, I couldn’t have planned it any better.”

SOUTHWEST MICHIGAN — As of Wednesday, Berrien County reported 13,908 COVID-19 cases and 271 deaths, according to the Michigan Department... read more