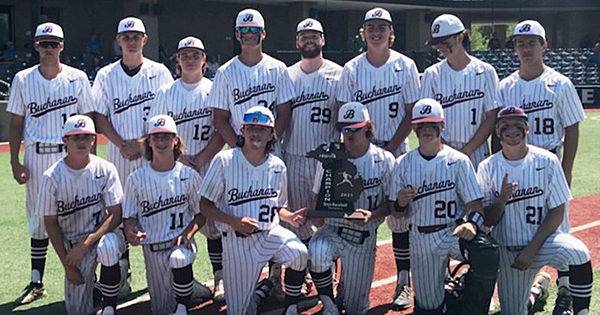 The Buchanan Bucks won the Division 3 Regional title, as well as its quarterfinal game to advance to Friday’s semifinals at Michigan State University. (Leader photo/DAVID SIDENBENDER)

Defeating No. 11 North Muskegon 9-0 for the regional title, and No. 7 Pewamo-Westphailia 10-3, Buchanan advanced to Thursday’s Division 3 state semifinals against No. 2-ranked Grosse Pointe Woods at Michigan State University at 5 p.m.

The Bucks used their typical great pitching and balanced offense to accomplish the feat.

In the regional final, Buchanan’s Matt Hoover was dominant on the mound, often matching the hot temps (low 90s) with his fastball velocity and mixing in off-speed pitches. With that repertoire, he held North Muskegon to two hits and no runs while striking out nine.

His biggest jam came in the third inning when the Norsemen got a walk and a hit from their top two hitters with one out and the score 0-0. Hoover quelled the uprising by striking out the three and four hitters to end the threat.

The Buchanan offense then stepped up and gave the Bucks’ ace a cushion to work with in the bottom of the third.

Drew Glavin led off with a double. Cade Preissing followed that, scoring a wild pitch allowed the first run to score with a single and after a stolen base by Preissing. Hoover followed with a walked in front of Jack Branch, who delivered an RBI single. Macoy West tripled to drive in two more runs.

The inning ended when Murphy Wegner added an RBI on a groundout, giving Buchanan a 5-0 lead.

Buchanan put the game away in the sixth when it plated four more runs on a walk by Preissing, a single by Hoover, a couple of errors by the North Muskegon, and a pair of extra-base hits from West (two-run double) and Wegner (RBI triple).

In game two, senior Jack Branch continued what Hoover started on the mound, allowing three runs on six hits, while striking out three to pick up his 11th win.

Keegan Pelly, the Bucks’ No. 9 hitter, was the catalyst for the offense. He started both rallies in the third and fourth innings for the Bucks by singling and eventually scoring in both innings.

The Bucks scored three in each inning, and in the fifth, Pelly singled in another run to make it 7-1 after Pewamo got its first run on a double by Tanner Worth and a single from Zach Smith in the fourth.

Finally, in the sixth, the Bucks put it away with three more runs. The Pirates helped with a pair of errors, an RBI single by Wegner, and a two-run triple from Deegan Huffman.

Buchanan only needed three outs to finish off the win.

Pewamo kept fighting, and triples from Ashton Worth and Conner Russell produced two runs, but it was not enough as Branch finished the game, inducing two ground outs to end it.

Glavin led the Bucks at the plate on the day, going 5-of-9 from the leadoff spot, scoring three runs and stealing three bases. The second baseman really had it going from the start and gave the Bucks a “spark” and energy all day.

“Nothing special really, I just was just looking for that fast ball down the middle and none of the kids really had that good of a breaking ball, so I knew I didn’t have much to worry about that, and I was just visualizing myself getting a base hit,” he said.

Buchanan’s catcher Wegner also had a great day going 5-of-8 with three RBIs, including a triple, as well as catching both games. He also controlled the running game by throwing out three would-be baserunners.

Branch helped his own cause with three RBIs in the quarterfinal game giving him four on the day.

“I thought the entire team had good at-bats today against good pitching,” said Buchanan Coach Jim Brawley. “Matthew Hoover was outstanding on the mound again, and Jack Branch had a gutty performance even though he was cramping up. Drew Glavin did a great job setting the table for us with his hitting, and Murphy Wegner continues to be the best catcher we’ve seen this season. Glad I have him on my team. Pelley and Zelmer both hit the ball hard, and Branch and Macoy West had a ton of RBIs.”

When asked what this run means to him and the players, Brawley said it helps make up for a lost season.

“It’s a little redemption for last year, when we had some of the best kids in the area not get to play their senior season,” he said. “Even though we didn’t set any specific goals this year, these kids just work so hard in the weight room, the cages, and on the field. My seniors graduated last night [Friday] and were ready to play today. It’s a hard-working group that deserves to see this success.”