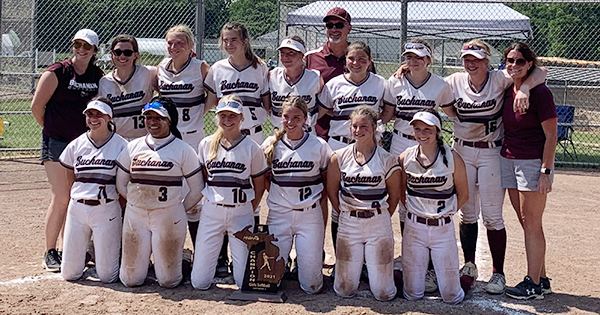 The Buchanan softball team won the Division 3 Regional championship with a 2-1 win over Schoolcraft in nine innings Saturday. (Submitted photo)

CENTREVILLE — Senior Sophia Lozmack had quite a day leading the Buchanan softball team to the Division 3 Regional championship Saturday.

Lozmack picked up both wins in the circle for the Bucks and delivered the walk-off single in the bottom of the ninth inning of the championship game.

Buchanan (34-4) defeated Schoolcraft 2-1 to win the regional title and earn a spot in the quarterfinals against Central Montcalm at Cornerstone University in Grand Rapids Tuesday. The Bucks reached the championship game with a 5-2 win over Watervliet in the semifinals.

“Sophia Lozmack was unbelievable today,” said Buchanan Coach Rachel Carlson. “I was worried about the heat, but she pushed right through that and was dominant all day.”

After holding the Eagles to one run through nine innings, Lozmack singled with one out in the bottom of the seventh to score Brooke Atkinson, who singled to open the inning. Atkinson moved into scoring position on a sacrifice bunt by Hannah Herman.

“I thought we should have hit the ball better than we did today, but the kids stepped up at the times they needed to step up. Even when we got down by a run in the seventh, they answered right back.”

The title game was scoreless through six innings as Lozmack and Schoolcraft pitcher Cassidy Bruner kept both teams in check.

The Eagles scored a run in the top of the seventh on a single, sacrifice bunt, ground out, and an error.

Buchanan responded quickly as in the bottom of the seventh, Atkinson, who singled to open the inning, scored on a Schoolcraft error.

Schoolcraft did not mount much of a scoring threat in either the eighth or ninth innings, while the Bucks failed to score in the bottom of the eighth.

Lozmack allowed four hits with 13 strikeouts and no walks in the championship game.

Buchanan finished with four hits, including a pair from Atkinson.

In the semifinals, Watervliet and Buchanan were scoreless through three innings.

Lozmack led off with a double and scored on a double by Hailee Kara in the top half of the fourth inning. Two outs later, Hannah Tompkins singled home Kara to give the Bucks a 2-0 advantage.

A sacrifice fly by Herman in the fifth inning scored Sage Pruett, who doubled to open the inning.

In the fifth inning, Kara doubled, Watervliet committed an error, and Camille Lozmack grounded out to score Kara. Tompkins followed with an RBI single to give the Bucks a 5-0 lead.

Buchanan finished with seven hits, including two by Kara and Tompkins.

OTSEGO — The postseason run for the Edwardsburg softball team ended in the Division 2 Regional championship game at Otsego... read more