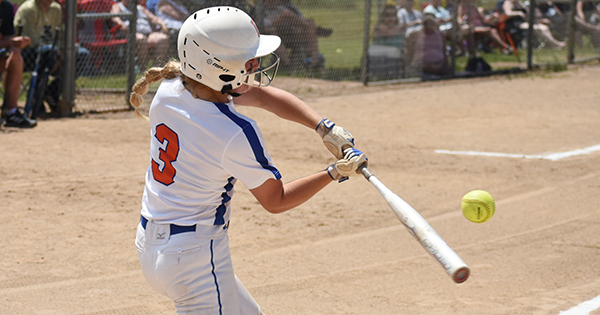 Caitlin Tighe had a pair of doubles in Edwardsburg’s 6-1 win over Lakeshorte in the regional semifinals Saturday. (Leader file photo)

Wayland used a two-run third inning to erase a 1-0 Eddies’ lead and went on to win 3-1 to advance to Tuesday’s quarterfinal round.

Edwardsburg ends its season at 27-10. The Eddies advanced to the finals with a 6-1 win over No. x-ranked Lakeshore (38-2) in the semifinals.

Edwardsburg scored its lone run in the top of the first as with two out, Emma Denison singled to score Lindsey Dalenberg, who had reached on an error to open the game.

Wayland responded with a pair of runs in the bottom half of the third inning. With one out, a walk followed by a home run from Kennedy Cole gave Wayland a 2-1 lead it would not relinquish.

Wayland added a run in the fifth to complete the scoring.

Edwardsburg was held to just two hits by Emma Ledema, who struck out seven.

Denison took the loss in relief of starter Hannah Hartline. The pair did not allow an earned run, while allowing four hits and striking out five.

The Eddies’ two hits — both singles — came from Denison and Alyssa Gearhart.

In the semifinals against Lakeshore, Edwardsburg used a pair of three-run innings to erase a 1-0 deficit.

In the third inning, with one out, Caitlin Tighe doubled, Gearhart walked and Denison delivered a two-run double to make it 2-1. Samantha Baker, who singled, scored on a fielder’s choice ground ball by Abby Bossler.

In the fourth inning with one out, Dalenberg doubled and moved to third on an error by the Lancers. Tighe’s sacrifice fly made it 4-1. Denison’s two-run single following a walk to Gearhart extended the Edwardsburg lead to 6-1.

Denison, who came on in relief of Hartline in the third inning, would do the rest as she and the Eddies’ defense would shut down the Lakeshore offense.

Hartline picked up the win as she and Denison did not allow an earned run while giving up four hits and striking out nine with two walks.

Edwardsburg finished with 10 hits, including two doubles from Tighe, and doubles from Denison, Baker and Dalenberg. Denison was 2-for-4 with four RBIs.