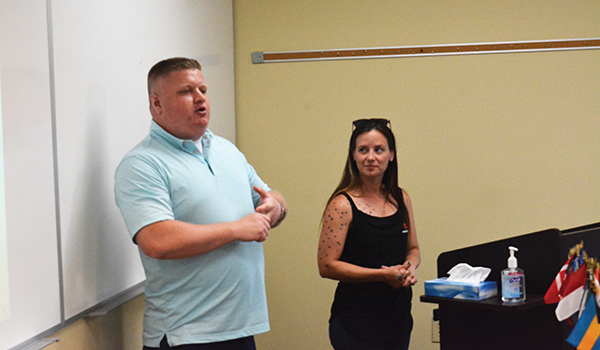 DOWAGIAC — A local nonprofit organization’s project was the topic at hand during the Dowagiac Rotary Club’s Thursday meeting at Front Street Crossing in Dowagiac.

Jeremy Truitt and Stefany Holland, of The Young Professionals of Greater Dowagiac, were on hand for the Dowagiac Rotary Club’s weekly meeting to provide the club with an update on the organization’s Russom Park Pavilion Project.

Truitt, a Fifth Third Bank manager, was one of the group’s founding members seven years ago. Holland, the organization’s vice chair, is a project manager with Wightman and helped put the project together.

The project, which has been in the works for more than three years, involves the construction of a 20-by-40-foot steel pavilion to complement Russom Park’s sports complex, which features baseball, soccer and softball fields for park visitors.

“This was a big undertaking,” Truitt said. “We didn’t know how it was going to go but honestly the response has been incredible.

The Young Professionals spent that time raising the $40,000 needed for the project, which it did by hosting popular events including the Paddling Poker Run and its annual “Uniquely Dowagiac” Christmas ornament sale.

The organization wanted to create something that would leave a lasting impact in the community.

“There are a ton of kids that are there constantly all the time,” Holland said. “There’s walking paths out there, baseball, softball, football, cheerleading and more. It’s already a great central location for our community and our children in the community so we thought having a pavilion there to provide a space for shelter, shade and fellowship was the goal for this project.”

Holland and Truitt are glad the project has been met with support for the cause.

“We’ve had so many people in this community, both individually and businesses come together and support this project because of the positive impact it will have on the community,” Truitt said.

Russom Park is located along the boundary line between the City of Dowagiac and Silver Creek Township. According to Holland, everyone involved in the project came together to make sure it succeeded.

“We had some really good conversations with the city, Silver Creek Township, Russom Park board and everybody,” Holland said. “There was zero animosity here. Everybody was so excited about it.”

With the steel structure scheduled to be delivered soon, construction will begin after. Holland expects the pavilion will be completed by the end of the summer.

Silver Creek Township and the Russom Park board will be responsible for the pavilion’s maintenance.

“We plan on having a ribbon cutting handing off ceremony,” Holland said. “We anticipate there’s going to be picnic tables, and you know, there’s been talk of grills. It’s been a really great project. It’s been very fulfilling and very heartwarming.”

In other news, Truitt said that the Young Professionals’ Fourth of July fireworks would be hosted

on the Friday night before the fourth of July.

“That has been possible by the fundraisers that we’ve held and also the generosity of the businesses and individuals who donated,” Truitt said.