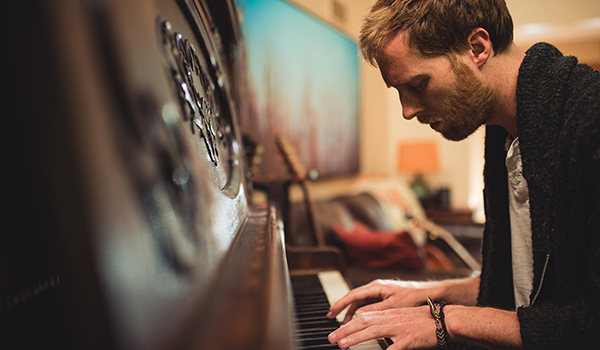 NILES – Two artists with roots and backgrounds in Niles found each other through connections in Nashville to fuse their talents in a collaboration both said highlights some of the best they each have to offer.

On May 28, the two artists released a collaboration. “Lie (featuring Taylor Clark)” by Lavender Galaxy found its way to several platforms including YouTube, SoundCloud and Spotify.

Brandywine alumni Eric Remington, the main artist behind Lavender Galaxy, now lives in Boston, Massachusetts. Niles High School alumni Taylor Clark has returned to Niles after spending time out west. The two did not know one another, but they once lived nearby on the same street and also share at least one previous employer.

The Niles connection helped lead to the musical one.

Clark has made music from orchestral compositions for corporate media branding, acoustic and songwriter driven work, and also worked in the electronic music space. Remington took a road from rock music to electronic.

“I used to make music that was bizarre and had a Pink Floyd meets The Cure [sound],” Remington said.

He found a creative combination in Lavender Galaxy that he connects with more with today.

“It’s a variety of electronica styles, with a generally positive energy, vibe and message,” Remington said. “If you listen to a lot of the lyrics, it’s positive
and uplifting.”

Remington’s sister was part of the catalyst that brought the two musicians together.

“She discovered Taylor [Clark, for me],” Remington said. “I’m a music nut. I’m completely addicted to music. Whether it’s making it or listening to it. I get an emotional attachment to it.”

After Remington heard some of Clark’s solo music, he was immediately moved.

“The song [by Clark] ‘Underpar’ was my introduction to him. It was unbelievable,” Remington said. “When I heard deep lyrics like that, I thought I have to reach out to him.”

He reached out to Clark and asked if he would consider collaborating on an electronic music song.

The two started working together on the song “Lie” from there.

Clark brought a more grounding tone to the Lavender Galaxy tone he had set.

“[Clark’s work] really changed the vibe that I was going for, but it was so well done,” Remington said. “I like to try different things.”

Clark said when Remington sent the music for him to write the lyrics and do a vocal track for, he took his time.

“I, of course, mulled over it for about a week,” Clark said. “I like to take my time doing anything. From an emotional standpoint, it’s interesting how songwriting happens. It can be so subconscious.”

While listening to the music, Clark began feeling the music and writing.

“It’s like I’m empathizing with someone else outside of my body, but sometimes that is me,” Clark said.

The lyrics and vocals to the song, “Lie,” ended up coming Clark’s  personal experience. As he processed the feelings of a past relationship, he found himself working it out through music.

“We hide ourselves, and in reality, what we’re doing is not only hurting ourselves, but we are hurting those close to us,” Clark said of sometimes putting on too brave a face when hurt.

Remington was excited about the work Clark returned, and the song was composed.

During the height of the pandemic, Remington said he was able to connect with more artists around the world.

“I don’t think I’ve ever reached out outside of the U.S. more than in the past year,” he said. “Being home so much has really put me everywhere else.”

Remington found himself interviewed on the BBC Radio Wiltshire show in April. He has been making connections with artists in Nashville, Venezuela and Croatia.

For Clark, the pandemic did not change too much of his day to day life.

“If I am in front of people, they interpret me as an extrovert, but I value my alone time,” Clark said.

He said he is not good at networking on his own.

“It makes me all the more grateful to meet people like [Remington]. You never find that package of someone good at networking and also good at heart,” Clark said.

He felt the genuine connection between the two as they worked on their collaboration.