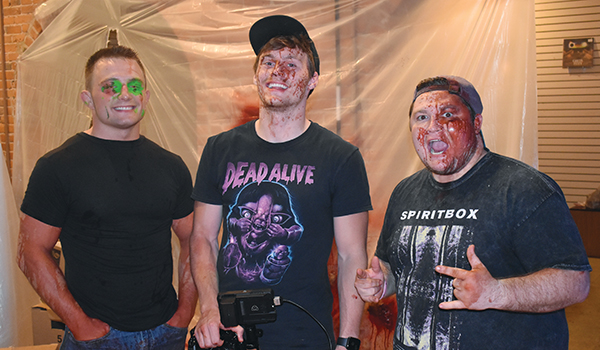 Brandywine graduates Courtlan Gordon, center, and Ryan Becker, right, are the driving force behind Oddest of the Odd productions. This week, they have been filming a “Goosebumps”-themed production at The Rage. Also pictured is actor and stunt person Chanc Ravish, left. (Leader photo/SARAH CULTON)

NILES — This week, The Rage in downtown Niles was host to a gruesome murder.

A cloud of smog overtook the two-story building, blanketed with plastic traps smeared red. A trail of blood splatted over cardboard boxes and countertops led to the body of what was once a young woman. The scene would have drawn swarms of police officers, news crews and detectives if not for the fact that — upon closer inspection — the body was little more than plastic and the blood faked to dress a movie set.

At the center of it all were Niles natives Courtlan Gordon and Ryan Becker. Despite the dried, caked-on blood covering their faces, the film-quality cameras in their hands suggested the pair was simply intent on creating a Hollywood-level production worthy of a scary good time.

“Our machine that we use to spray actors with blew up on us,” Becker said, gesturing toward his red-stained face. “It’s a casualty of the job.”

“It seems like every shoot, we end up covered in blood,” Gordon said with a laugh.

Gordon and Becker, Class of 2013 Brandywine High School graduates, are the creative force behind Oddest of the Odd productions. Over the past two weeks, they have been directing, producing and shooting a short, “Goosebumps”-inspired film in downtown Niles. The film will be launched in July along with an Indiegogo campaign to raise support and funds to shoot a larger anthology film.

“We grew up on ‘Goosebumps,’” Becker said. “Now, we are adults, and the people our age now want something more R-rated.”

“We are retelling ‘The Haunted Mask,’ which is probably the most notorious story from ‘Goosebumps,’’’ Courtland added. “Of course, it was written for kids at the time, so we wanted to evolve the story and reimagine it in our own way.”

The concept film is the latest move for the filmmakers. Friends since childhood, Gordon and Becker teamed up toward the end of high school to collaborate.

“Personally, I’ve done this since I was about 7 years old when my family would give the camera to record family gatherings and little films with my cousins,” Gordon said. “My family celebrated Halloween the way most people celebrate Christmas, so It’s been a lifelong dream to make horror films, specifically.”

Bringing with him a strong comedy background to merge with Gordon’s love of horror, Becker said his business partner inspired him to enter the film industry.

“I would see the videos [Gordon] was doing and be like ‘man, this looks awesome,’” Becker recalled. ‘He’s the one who got me into filmmaking, like religiously.”

In 2015, the duo launched their YouTube channel Oddest of the Odd. Now sitting at more than 45,000 subscribers, the channel features short horror films, “video game in real life” productions and videos inspired by popular movies.

Their success on YouTube led the Brandywine grads to Los Angeles, where they worked on large-scale Hollywood productions for three years.

“LA taught us a lot, but it also taught us we don’t want to be there. We are Michigan boys,” Gordon said. “We can take everything we learned and bring it here. We’ve been in every position. Right now, we do our own makeup, our own props, special effects, writing, shooting, directing, shooting, the set dressing, casting — literally everything.”

Since coming back to Niles, both Gordon and Becker said they had received an outpouring of support from family, friends and community members. Now, the duo hopes to make their hometown a haven for filmmaking in small-town Michigan.

“It’s not only our hometown; it’s a very pretty city. It looks like it belongs in a movie, and we want to take advantage of that,” Gordon said. “Out here, when you say, ‘we want to make a movie,’ people want to help. People want to be involved. In LA, you don’t have that.”

With the community’s support behind them, Becker said Oddest of the Odd had created professional, well-told productions that he and Gordon are proud of. Their “Goosebumps” concept film is just one of at least seven projects the production company has been working on.

“We’ve been cooking up a lot of stuff over the last year and a half,” he said. “We always knew we would be doing big things like this, but to have our own set, our own productions, it feels really great.”

Though the remaining projects have yet to be announced, both Gordon and Becker are excited to launch the “Goosebumps” concept film next month. Before it and the Indiegogo drop, Gordon only offered one piece of advice to Oddest of the Odd’s fans and the community at large: “Viewers beware.”