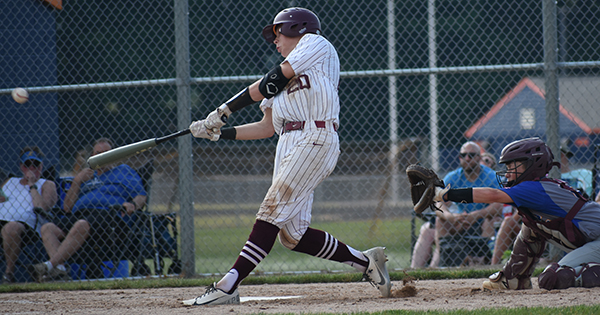 BRIDGMAN — The plan is simple for No.1-ranked Buchanan in the postseason.

The Bucks want to get good pitching, play solid defense and wait for its hitters to find their groove.

The Bucks combined all three as they routed Lawton 11-1 in the Division 3 Regional Semifinals at Bridgman High School Wednesday.

“If we can continue with our pitching and our defense, which is usually solid, sooner or later someone usually runs into one,” said Buchanan coach Jim Brawley. “When you get two doubles from your sixth hole and ninth holes, that’s a good thing. Murphy [Wegner] and Keeghan [Pelley] were the difference in the game today.”

Buchanan, which will face North Muskegon (30-9) in the regional final at Cornerstone University in Grand Rapids at 1 p.m. Saturday, sent a strong message to the Blue Devils by scoring seven runs in the first inning.

The Bucks sent 11 hitters to the plate in the bottom half of the first inning and scored seven runs on six hits.

After starting pitcher Macoy West got out of the opening inning without giving up a run despite a walk and a Buchanan error, the Bucks exploded in the bottom half of the frame.

With one out, back-to-back singles by Cade Preissing and Matthew Hoover produced the game’s first run. Preissing moved into scoring position as a pickoff attempt by Lawton pitcher Nick Marcelletti got by the Blue Devils first baseball, allowing Preissing to move around to third base. A couple of wild pitches moved Hoover to third and allowed him to score before West singled to score Branch. Murphy followed with a run-scoring double.

An error made it 5-0 in favor of Buchanan. Drew Glavin, the 10th Buck hitter to step to the plate delivered a two-run single.

Lawton would score its only run of the game in the top of the second when with two outs, a fielder’s choice play allowed Zach Lull, who singled, to score. Lull moved into scoring pitches when West issued back-to-back walks to load the bases.

West would settle down after escaping any further damage and worked two more innings before Glavin came on to pitch in the fifth. West gave up one hit and struck out five. Glavin struck out two of the three batters he faced.

“Macoy actually needed a little work,” Brawley said. “He is a great pitcher, and in the second inning today, he lost it a little bit, but that is just because he has not had the work he needs. He throws BP [batting practice] to us, but he needed the work. He straightened that out, and he looked good the last two innings, which was important.”

The Bucks (32-2) responded with a pair of runs in the bottom of the second. Buchanan added single runs in the third and fourth inning to force the mercy rule.

With West and Glavin pitching against Lawton, Brawley saved his top two pitchers for Saturday’s championship game. Branch is 10-0 on the season, while Matthew Hoover is 8-1.

Should Buchanan beat North Muskegon, it would advance to the quarterfinals at 4 p.m. against the Schoolcraft, which the Bucks have defeated five times this season, and either Pewamo-Westphalia or Grandville Calvin Christian, which will play their quarterfinal game today.

BRIDGMAN — No. 1-ranked Buchanan made short work of Lawton in the Division 3 Regional semifinals at Bridgman High School... read more