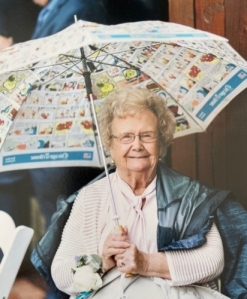 Born Sept. 6, 1928, in Niles, a daughter of Jay and Mildred (Teske) Griffee, Jayne was raised in Niles and graduated from Niles High School. It was in high school that she met her future husband, Richard McQuaid, and the couple was married on Sept. 20, 1947, in Niles. They later moved to Marquette in 1948, where they established a home and lovingly raised their family of five. While Richard was busy with his automobile dealership, Jayne cherished her roles of wife, mother and homemaker. She also found time to volunteer throughout the community, volunteering at Marquette General Hospital, Peter White Public Library, often serving as a docent on historical tours around Marquette, and had a wonderful group of friends on High Street that were lifelong companions. As active members of St. Paul’s Episcopal Church, both Jayne and Richard served on various committees, with Jayne serving on the Vestry.

In retirement, Jayne and Richard enjoyed spending 16 winters in Punta Gorda, Florida and traveled extensively throughout the U.S. and Canada in their motor coach, with Jayne serving as navigator. In the summers, she loved and cherished her home on Ridge Street that overlooked the Marquette Lower Harbor.

She was preceded in death by her parents; her husband, Richard, in 2011; and brother, David Griffee.

Friends may call at St. Paul’s Episcopal Church on Monday, June 14, beginning at 9:30 a.m. A Requiem Eucharist will be celebrated at 11 a.m. A reception will follow. Interment will be made in the Park Cemetery.

The family would like to express their appreciation to the caregivers at Brentwood of Niles for the wonderful care Jayne received and for the many kindnesses they extended to the family. A memorial service will also be held on Labor Day weekend in Niles, Michigan with details to follow.

Fassbender Swanson Hansen Funeral and Cremation Services is serving the family, where condolences may be expressed online at fassbenderswansonhansen.com.