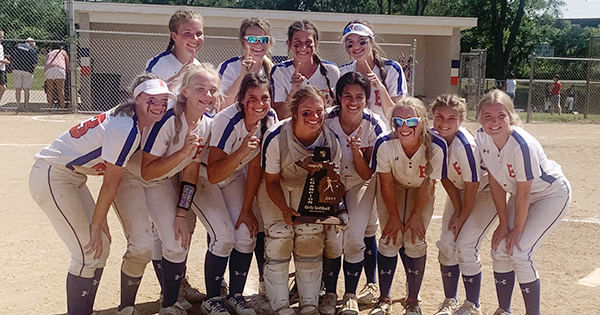 The Eddies (26-9) defeated Three Rivers 10-5 in the semifinals before blanking Niles 5-0 in the championship game. The Vikings reached the finals with a 6-3 win over Dowagiac in the first semifinal Saturday.

Emma Denison was solid in the circle for Edwardsburg as she pitched a five-hit shutout with 10 strikeouts and no walks. The Eddies did not make an error against the Vikings.

After Denison struck out two of the three Niles hitters she faced in the first inning, Edwardsburg grabbed a 1-0 lead on a run-scoring double by Denison. With two outs, Caitlin Tighe singled before a walk to Alyssa Gearhart moved her into scoring position.

The Eddies, who will face Lakeshore in the second semifinal of the Otsego Regional Saturday, added two runs in the second inning on a walk to Haley Masten and a two-run home run from Averie Markel.

Edwardsburg used a single by Gearhart, a Niles error and a walk to extend its lead to 4-0 after three innings. The final Eddies’ run came in the fifth when Abby Bossler drew a bases-loaded walk.

Bailey Bickel hit the first pitch from Dowagiac’s Sierra Carpenter into the right-field corner and turned on an inside-the-park home run speed.

Mya Syson added a run-scoring single, while Alexis Rauch scored on a ground out by Chloe Hargreaves.

The Chieftains (19-12) cut the Niles lead to 3-1 in the second inning as Caleigh Wimberley singled to drive in Kimi Beattie, hit by a pitch open the inning.

The score remained 3-1 until the top of the seventh when the Vikings scored three runs.

With one out, Bickel, Taylor Young and Ashlynn Wilken all singled in front of Rauch, who lifted a sacrifice fly to left field to score Bickel. Syson followed with a two-run single to give Niles a 6-1 lead.

In the bottom half of the seventh, with one out, Calley Ruff, Aubrey Busby and Carpenter all singled. Carpenter drove in Ruff. Abby Dobberstein followed with a sacrifice fly to score Busby. Beattie lined out to shortstop to end the rally and the game.

Niles scored its six runs on nine hits. Bickel was 3-for-4 with the double, home run and an RBI. Young was 2-for-3, while Syson was 2-for-4 with three RBIs.

Syson was also the winning pitcher as she struck out seven.

Carpenter took the loss for the Chieftains.

Busby was 2-for-4 to lead Dowagiac offensively.

In a game that went back and forth, Edwardsburg scored five times in the top of the seven to end the Wildcats’ upset bid.

Trailing 1-0 after one inning, the Eddies scored three times in the third to take the lead over their Wolverine Conference foe.

Ella Castelucci singled and moved to third on a double by Tighe to start the rally. A two-run single by Gearhart gave the Eddies the lead. Bossler’s groundout scored Denison, who had singled, to make it 3-1.

In a bizarre play in the bottom of the fifth, Three Rivers scored three runs without the aid of a hit. An error and back-to-back walks allowed the Wildcats to regain the lead at 4-3. With Ava Forman at the plate, Gabby Charvat scored on a wild pitch, while Kali Heivilin came around to score on an error by the Eddies’ catcher. Shantel Blyly, who had drawn a walk, also scored on the error.

Edwardsburg rebounded by scoring two in the sixth and five in the seventh inning.

Masten and J Dawson had run-scoring singles in the sixth, while an error by the Wildcats and a single by Lindsey Dalenberg made it 9-4. Castelucci doubled to drive in the final Edwardsburg run.

Heivilin had a solo home run, her state record 29th of the season, to complete the scoring for the Wildcats.

Hannah Hartline started for the Eddies with Denison coming on in the fifth inning to earn the win.

Castelucci went 3-for-4 with an RBI, while Dalenberg, Tighe, Denison, Samantha Baker, and Masten had two hits. Both of Tighe’s hits were doubles. Baker added a triple.

SOUTHWEST MICHIGAN — As of Monday, Berrien County reported 13,879 COVID-19 cases and 269 deaths, according to the Michigan Department... read more