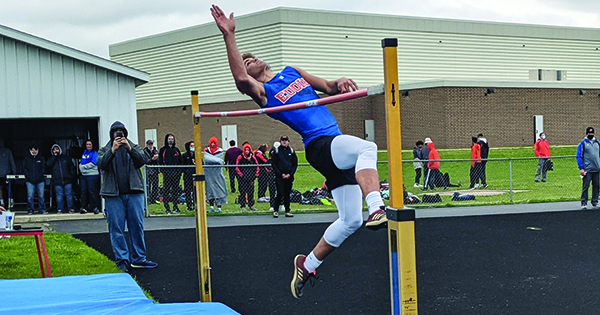 ZEELAND — The Frankenmuth boys track and field team knew it had a chance Saturday to win its first MHSAA Finals championship since 2011 — but only if everything went right.

Not everything did, but plenty went better than planned as the Eagles won for the first time in Lower Peninsula Division 2, outpacing runner-up Flint Powers Catholic by 3.75 points to add a third championship to those won in Division 3 in 2005 and 2011.

Frankenmuth’s power in relays paid off in the final event, as the Eagles finished second in the 1,600-relay to Yale, scoring eight points, while Powers came in eighth to add only one point to its team total.

That runner-up finish matched another in the 800-relay, and Frankenmuth also won the 400 relay, with senior Daniel Barger joining junior Ian Stephens and sophomores Sam Barger and Andrew Braman. Those four ran the 800 together as well, with senior Ryan Brenner and junior Seth Malmo joining Sam Barger and Stephens on the 1,600.

“We knew it came down to the mile relay, and I was pretty easy going the entire time — and then the mile relay hits, and we knew Powers had to do something, and we knew we had to do something, and I had to be alone for a little while,” said Frankenmuth coach Luke Sheppard. “I just had to sit and soak it all in, but it was a lot of fun. It’s a lot of fun to watch these kids run. They always compete. They always do what they’re supposed to.”

The Eagles’ lone win came in the 400-relay, but they picked up other points throughout the day in the 100 and 200 dashes, 300 hurdles, high jump and discus.

Powers, meanwhile, got a first in the 100 and third in the 200 from junior Austin Hamlin and placed in all four relays among a variety of scoring performances.

Powers had entered seeded first in the 400-relay and Frankenmuth third based on Regional times, but the Eagles crossed the finish line 41 hundredths of a second faster than the runner-up Chargers.

“We always know coming into meets we’ve got to up-seed — be better than what we’re seeded, be better than what we’ve been doing,” said Brenner, who in addition to his 1,600-relay leg contributed a sixth place in the 300 hurdles and seventh in high jump. “That was our mindset through this whole meet, knowing we had to perform at the best of our capabilities to do what we just did.”

Motivation was not in short supply anywhere this weekend, or throughout the season, after COVID-19 led to 2020 spring sports being canceled.

Fremont senior Nathan Walker capped his senior year Saturday by adding wins in the 1,600 (4:16.12) and 3,200 (9:34.30) to the cross country championship he earned in the fall. Edwardsburg junior Luke Stowasser also was a double champion in Division 2, claiming the long jump in 21-10 and high jump in 6-6 after finishing second in the former two years ago as a freshman.

Edwardsburg also finished sixth in the 400-relay with the team of Isaiyah Swartz, Warren Fessenden, Brett Allen and Brian Domer. That unit posted a time of 44.03.

Niles’ Marika Ruppart tied for sixth in the high jump with a height of 5-2.

Hudsonville junior Ryan Shinabery edged Monroe Jefferson junior Alex Mansfield by 15 inches to win the discus with a toss of 163-7, but Mansfield won the shot put by more than eight feet ahead of the field with a toss of 59-2.25. Allendale junior Cam Battjes rounded out the field event champions with a pole vault of 14-4.

Romulus junior Troy Cranford won the 200 in 22.84, pacing a race where the top three finishers were separated by a tenth of a second — after he was third and Berrien Springs junior Jamal Hailey second to Hamlin in a 100 decided by less than two hundredths of a second between those three. Orchard Lake St. Mary’s senior Edward Watkins won the 400 in 49.1 seconds, and Marysville senior Evan Woodard won the 800 in 1:55.25. Allendale junior Patrick Adams won the 110 hurdles in 15.19 seconds, then finished second in the 300 as Vicksburg senior Levi Thomas edged him in 40.10.

In Berrien County Trial Court Monday, a Jackson, Michigan resident was sentenced to probation after being found drunk in his... read more