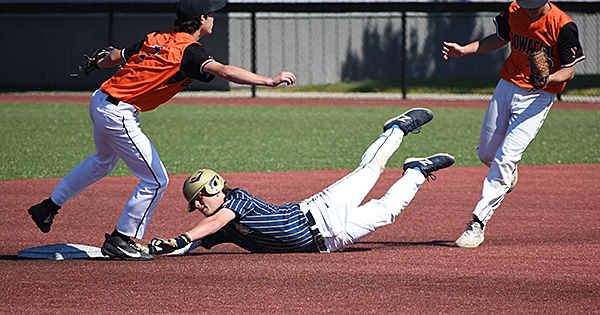 STEVENSVILLE — A fast start led the Niles baseball team to a 9-1 win over Dowagiac in the Division 2 pre-district contest at Lakeshore High School Tuesday.

The Vikings (21-10-1) scored at least one run in the first five innings against the Chieftains, including three in the second and two each in the third and fourth innings.

Dowagiac (8-17-1) averted the shutout with a run in the fourth inning.

“It was a good game for us,” said Niles Coach Mike Vota. “At this time of year, you are 0-0. Now, we are 1-0. We still have a long way to go. We have got a lot of things I want to work on. I wasn’t happy with some of our reactions today. We didn’t run bases real well.”

Gage Vota singled to open the inning before the Chieftains recorded two consecutive outs as they appeared to have a chance to get out of the inning without any damage. An error on a bunt by Cameron Clanton allowed Vota to score from first before Mason Waggoner and Jude Abbadessa had back-to-back doubles to make it 4-0 in favor of the Vikings.

Extra base hits were a theme for Niles throughout the contest. Chase Lotsbaich’s double in the third inning extended the Vikings’ lead to 5-0 before a throwing error allowed Niles’ sixth run to cross the plate.

A double by Vota in the fourth inning made it 8-0 in favor of the Vikings.

Dowagiac, which does not have a single senior on its roster, finally got on the scoreboard in the fourth inning, as Ethan Hannapel walked to start the inning and moved to third on a single by Cole Weller.

Niles turned a double play one batter later, but Hannapel scored on the play to make it 8-1.

A double by Abbadessa scored Clanton in the fifth inning to complete the scoring.

“Overall, pitchers threw strikes,” Vota said. “We talk about it all the time — the freebies — when you eliminate walks and errors, things usually work out.”

Dowagiac Coach Keith Schreiber had to go with “Plan B” when it came to pitching Tuesday. The original plan for the Chieftains was to pitch Ben Klann and have Kanyon Binns catch, but when Binns broke a bone in his hand during practice Monday, the Chieftains had to regroup.

“Our starting pitcher had to catch,” Schreiber said. “He had had a couple of recent complete-game victories in our conference. Not that Henry hadn’t pitched well, because he had. We don’t strike people out, so you have to make a ton of plays. The last 14 games of the season, we were 8-6. A lot of that was because we started making plays. Today, we did not make enough plays.”

The Vikings, who will face Berrien Springs (11-11) in the district semifinal at 10 a.m. Saturday, finished the game with 11 hits, including six doubles. Abbadessa, Racht and Vota all had two hits.

Dowagiac finished with just three hits, all singles. Cole Weller, Henry Weller and Cayden Dorman were all 1-for-3.