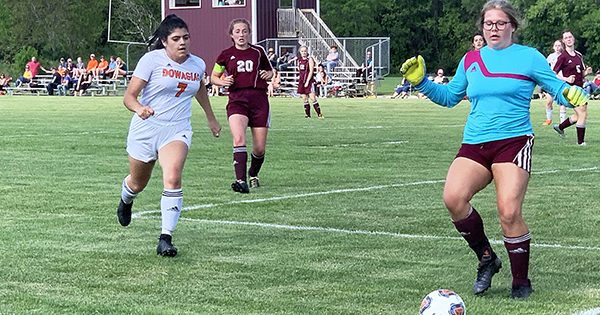 BUCHANAN – As the first kick was made, Dowagiac showed its game plan was to attack and pressure host Buchanan.

By winning in the semifinals round of the Division 3 District soccer tournament Tuesday night, the Chieftains advance to the finals. Dowagiac’s attacking style of play lead them to an 8-0 victory over the Bucks.

“We did a really good job of attacking,” said Dowagiac Coach Chad Davis. “I thought the whole team from the back up to the forwards played at the same level. I didn’t see a lot of mismanagement.”

The Chieftains had 18 shots on goal in the first half and were able to take advantage with three goals.

Kholie Goins got the night started early for Dowagiac with one goal. Senior Allie Connor scored her first not long after Goins. To cap off the first half, sophomore Jessa Davis gave the Chieftains a 3-0 lead going into halftime.

In the second half, Dowagiac scored five goals in 11 minutes to secure the victory after 51 total minutes played.

Senior Martha Schaller started quick for the Chieftains in the second half, scoring just 30 seconds into the half. Conner scored her second and third goals of the match soon after Schaller. Conner ended the night with a hattrick. Both Thalia Lara and Emma McCrorey had goals in the half.

Dowagiac’s tough defense allowed for the majority of the game to be played on Buchanan’s side of the field. Only allowing the Bucks a few opportunities at the goal, senior keeper Kaylah Contreras had six saves.

“The girls deserve it. They did the work,” Davis said. “I am very proud of these girls. They have put in a ton of work. It’s a huge step for the program. Hopefully, this brings more excitement and attention to the girl’s program.”

(The Dowagiac girls soccer program has appeared in numerous district championship matches, including winning the school’s only championship in 2004. We regret the error in the story posted earlier today. The story has been updated to eliminate the error.)

DOWAGIAC — One of Dowagiac’s most beloved festivals is returning this summer. As the Michigan Department of Health and Human... read more