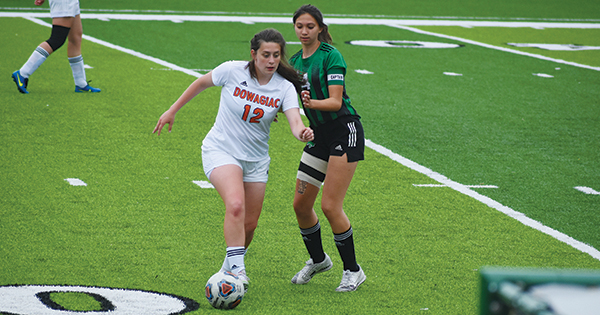 Dowagiac shuts out Berrien Springs to advance to semifinals

BERRIEN SPRINGS — With a nearly complete roster, Dowagiac Coach Chad Davis was confident his squad could get past host Berrien Springs in the opening round of the Division 3 District soccer tournament Thursday night.

Having had to play with limited numbers all season due to COVID and injuries, the Chieftains were nearly at full strength as they hit the turf field at Berrien Springs.

Dowagiac used its depth to score a 3-0 victory over the Shamrocks to advance to the district semifinal at Buchanan Thursday. The Bucks advanced to the finals with a 3-1 win over Constantine last Monday.

“We got into it fast,” Davis said. “They [Berrien Springs] did a great job of battling today. It took us a while to open them up and get some lanes going. We had several opportunities to finish. We just couldn’t find the back of the net. The girls were hungry, but we couldn’t connect on them.”

The Chieftains (7-6-1) got on the scoreboard early as senior Martha Schaller scored just three minutes into the match. Dowagiac would make it 2-0 nine minutes later when freshman Faith Green found the back of the net.

It appeared that the Chieftains had made it three goals late in the first half, but the officials ruled the ball, which appeared to bounce up and hit the inside of the crossbar, had just hit the bar and not crossed the goal line.

Dowagiac settled to a 2-0 halftime advantage.

The Chieftains scored the lone goal of the final 40 minutes as junior Riley Stack took a pass from senior Allie Conner and beat the Shamrock goalie to make it 3-0 in the 52nd minute.

Defensively, Dowagiac was solid the entire 80 minutes as it allowed just one shot on goal, while senior keeper Kaylah Contreras corralled without issue.

“I thought our defense was stellar,” Davis said. “We kept the game for the most part on their side of the field and our mids played strong. Our forwards attacked. We probably could have scored five or six more goals, but that is the way the ball bounces sometimes, especially in playoff games.”

Dowagiac finished with 15 shots on goal.

EDWARDSBURG — Two southwest Michigan chambers of commerce are combining forces to host an event and raise funds for their... read more