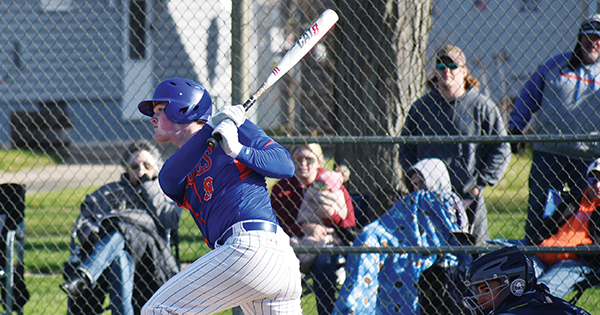 The Edwardsburg baseball team won its seventh Wolverine Conference championship with a sweep of Three Rivers Monday. The Eddies were 16-0 in league games this season. (Leader file photo)

The Eddies (25-3) defeated the Wildcats 11-0 and 16-2 to finish conference play with a perfect 16-0 record to claim their sixth consecutive title. Edwardsburg has won all but one baseball championship since joining the league eight years ago.

“We have had and have very good and dedicated baseball players at Edwardsburg,” said Edwardsburg Coach A.J. Gaideski. “They are eager to learn and practice with a purpose. I truly enjoy practicing because our players work hard and push themselves to be the best they can be. My assistant coaches do a great job keeping our players motivated each and every day. They also keep our players focused on doing the little things that you need to win ball games.”

A.J. Obren tossed a two-hitter shutout with nine strikeouts and no walks in the opening game.

The Eddies scored 11 runs on 10 hits, including two each from Nate Dalenberg, Sam Robinson, Ethan Cebra and Patrick Szlanfucht. Cebra had a double and two RBIs. Landon Mikel also drove in a pair of runs.

In the nightcap, Robinson scattered seven hits and struck out three to earn the victory.

Offensively for the Eddies, who had 13 hits, Dalenberg was 3-for-5 with three RBIs. Robinson doubled and drove in five runs, while Connor Ostrander, Andrew Colvin and Zach Closson all had a pair of hits.

Cebra doubled for Edwardsburg, which also got triples from Ostrander, Logan McColley and Colvin.

With the regular season winding down, Gaideski and the Eddies are getting ready to compete for a Division 2 District championship.

The veteran coach said his team is good at keeping its focus and doing the little things that help win games.

“Our district is loaded with great teams and coaches who have won state championships and/or have won 100s of games,” he said. “We will need to keep that focus and work ethic with an eye on the details to compete and have success in our district.”