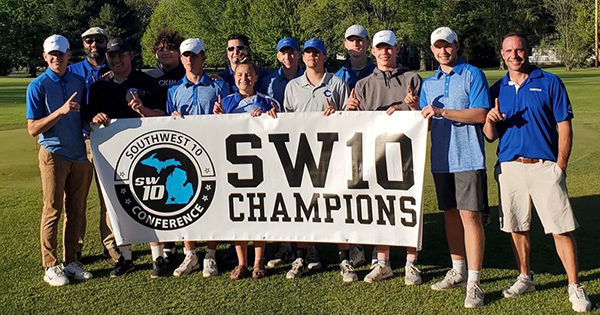 The Rangers hosted and won their final Southwest 10 Conference Jamboree last Thursday to lock up the conference championship. (Submitted photo)

The Rangers hosted the final league jamboree of the year at Diamond Lake Golf Course where they shot first place followed by Marcellus, White Pigeon and Centreville.

Cassopolis only needed to finish in the top two to lock up the conference title.

The Rangers were led by medalist Brayden Westrate’s 39. No further results were provided.

Cassopolis is back on the links Friday, May 21 at Centreville. Play is scheduled to begin at 4 p.m.

Otsego was also scheduled to play, but did not.

The Bulldogs’ Sean Kelly and Aiden Woosley shared medalist honors with a score of 48.

“Jonny Bontrager, our No. 1 was gone again,” said Dowagiac Coach Bob Turner. “The Spagnoli brothers had their best rounds of the year.”

Dowagiac will play Thursday at Three Rivers before returning home Friday to face Plainwell and Three Rivers in another Wolverine Conference match. Play in both matches begins at 4 p.m.

SOUTHWEST MICHIGAN — As of Monday, Berrien County reported 13,662 COVID-19 cases and 259 deaths, according to the Michigan Department... read more