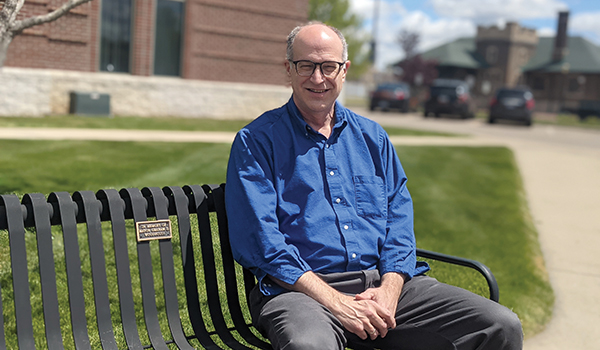 DOWAGIAC — The city of Dowagiac has been bustling with projects in recent months.

From the ICG building project, the grand opening of the renovated Dowagiac District Library and to the development of the Riverside Park project, the city has taken strides toward improving itself and attracting new residents and businesses in the process.

City manager Kevin Anderson believes there is much work to be done but also acknowledges the developments that have taken place.

“You start looking out at all those projects that have been underway,” he said. “There have been some really transformative pieces that have taken place. That doesn’t mean we’re not working on other things, but I think as we work our way through the pandemic, a lot of really good things have happened and while there’s still plenty more to do, we like where things are going.”

Anderson, who was hired on as city manager in 2008, believes the community is responsible for the positive changes the city has seen over the years.

“The thing that has been amazing to me, and part of the reason I came here, is that this community and the officials really had a strong sense of community and strong desire to see the community continue to improve,” he said. “I kind of stepped into the middle of that process that had really been going on for 10 years or more. Being able to step into the middle of that and to work with this group to help try to fulfill a community vision has really been remarkable because there’ve been a lot of transformative things that have taken place.”

Anderson highlighted several areas in the downtown area where the city was able to help eliminate blight and make the property useful, including the site of the Dowagiac Area History Museum and the site of the James Snow building.

“Where the museum is now, the building before it had been left vacant for a period of time, and there were gravel parking lots,” he said. “We were able to go in there and turn that into a spot where a farmers market can be located and the museum can be accessed. … Where the Snow building is, there were a lot of older buildings there. We were able to buy up all the properties, take them out and rework that so if you look, we have a downtown that’s growing and expanding with reduced blight. That doesn’t just happen everywhere. It happens when you’ve got a group of elected officials with the support of the community pointing us in the right direction.

“It’s been my good fortune to say okay, well I’ll try to help figure out how to get there. There’s been a lot that’s gone on over the last 15-20 years and I’m happy to at least have a part in it.”

Anderson and the city continue to address the redevelopment projects determined by the community to be high priority in the city’s 2019-29 Master Plan Update and said the city has a strong commitment to reducing blight and increasing investments in residential properties.

“We have worked with a number of grant agencies and work with members of the community for investment in their properties and also for reduction of blight,” he said. “We’ll continue to do that because again that’s all part of having strong neighborhoods and making this the kind of place that people want to invest in their property. You’ll see that kind of commitment.”

A strong commitment towards recreational facilities and access to the water is also something the city is working on, with the city’s Riverside Park project beginning to take shape.

“We’ve got some trailways that are planned and those will be done as we’re able to get grants along the way,” Anderson said. “The council has been very committed to public space, parks and use of our access to water for people so that that will be another part of it.”

Anderson also mentioned that community members can expect the council to continue its effort to transform older buildings into full reuse places. The city recently purchased the former Lincoln School building and hopes to find a buyer with a vision for the space.

The move is the latest in the city’s attempts to address the four redevelopment projects determined by the community to be high priority in the city’s 2019 Master Plan Update.

According Anderson, the four highest priority properties are:

• The former ICG Building, Franklin and Paul streets. Anderson said the city purchased the building and has been working side by side with the school district to redevelop the site for school purposes.

• The former Harvey’s building, 143 S. Front Street. According to Anderson, the city purchased this building as part of a multiple property purchase and then actively sought developers for redevelopment. Redevelopment is nearing completon.

• The former Division Tire, 303 E. Division Street. Anderson said this property is in the hands of private ownership and that significant improvements and investment
are occurring.

• The former Lincoln School, 407 E. Division. Anderson stated this is the only one of the four properties identified as a redevelopment priority for which new investment has yet to occur.

“We’ve continued to work with downtown property owners to secure grants and facade program funding, and continue to work on our corridor to make some improvements that way.”

The COVID-19 pandemic forced the city to come up with ways to adapt to the situation on the fly, including staggering hours of work crews to reduce face-to-face interactions and the installation of a drive-up utilities terminal behind city hall.

“We’ve had a lot of positive feedback from folks saying why didn’t you do this five years ago,’” Anderson said. “When we look at those kinds of things we ask ourselves how do we respond to the current situation but make it so that it’s going to be positive in the long term? That’s kind of how we approach any problem that arises. It’s challenging, but we’ve got a good staff. We’ve got an excellent council that really tries to keep that mindset in front of us to say, ‘well we’re faced with this, how do we become better?’ We’re not perfect. We don’t hit the mark every time, but we’re always trying to improve.”