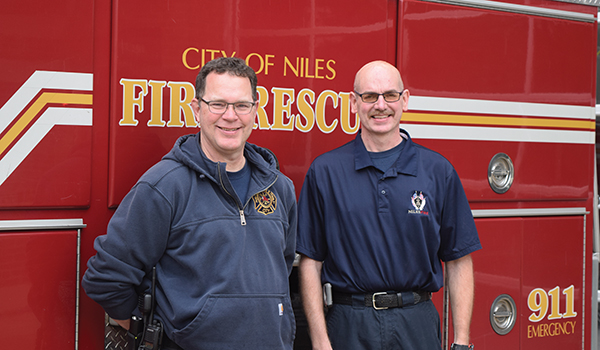 NILES – Nearly 60 years of experience hung up its gear one last time on Thursday from the Niles City Fire Department, as two lieutenants retired from the force.

McAllister came to firefighting after learning his father had been a firefighter, and his father-in-law was fire chief at the Morris Fire Department in Niles.

Before McAllister was a fire fighter, he worked for the Southwestern Michigan Community Ambulance Service as an emergency medical technician.

“I worked for SMCAS full-time for eight years, and then I came over to the ‘red side,’” McAllister said. “I enjoyed the time there, and I’ve enjoyed the time here. It’s just been amazing and fulfilling.”

McAllister moved with his family to Cass from a town outside of Atlanta, Georgia, called Jonesboro, when he was 8 years old. In 10th grade, his family moved to the Niles area.

In retirement, McAllister said he will miss serving people on a one-on-one level.

“We get out there on the worst day of peoples’ lives, and we try to make it better,” McAllister said. “I’ve really enjoyed that over the past 28 years.”

Niles City Fire Department Captain Don Wise said McAllister brought the department from “just fires” to bringing the departments’ medical first response to EMT levels.
“We are one of the only departments in Berrien County that have Basic Life Support non-transport,” Wise said. “All of our members are EMT, or higher, trained.”

Wise said McAllister was also a big part of having a technical rescue trailer housed in the department, which allowed them to train for confined spaces, ropes, building collapse and more.

“Bill [McAllister] was a mentor to everyone here. He’s a very calm spirit,” Wise said. “His faith really plays a part, and everybody sees him live out his faith in how he deals with stuff. You never see him get upset. He is always cool and calm. We’re really going to miss Bill.”
Rieth played a big part in developing the hazardous material resource section of the Niles City Fire Department, Wise said.

“[He helped] get everybody trained up on how to figure out what the chemical may be, and what kind of safety equipment we need to wear,” Wise said. “Scott [Rieth] was also a big part of our commercial fire inspection program where he created the database, worked with the iPads and training the guys so we can go out and gain the information from the commercial fire inspection and retrieve that at an emergency scene.”

Rieth said he initially just wanted to give the fire department a try. He was working on obtaining his EMT license and spoke with the station commander and fire chief at the time who had him try out the training.

“[My wife] was hoping it would just be a phase,” Rieth said with a laugh. “I took the training and did my first fire practice and ended up getting carbon monoxide poisoning from it. I came back from it and said ‘I loved it.’ She knew we were in trouble then.”

Over the 29 years he has been with the Niles City Fire Department, Rieth has continued to face his fears and challenges head on.

Rieth recalled being challenged by his peers to use his small space training to attempt to crawl through a 10-foot long, 18-inch wide tube.

“They said nobody could crawl through,” Rieth said. “I was able to make it through with an airpack.”

He said when he started to “freak out,” he calmed himself down and began moving his finger tips and toes again to get through the tube.

Throughout his career as a firefighter, Rieth said he has seen things he wished he could forget, but that he also used that small space training to help others.

“I’ve had a lot of fires that I was the one who got to crawl into the small spaces, or crawl up into attics and small spaces like that. I loved it,” he said.

The Niles City Fire Department will be looking for replacements, but Wise said it will take time.

Evy’s Closet to reopen May 6

NILES – Clothing racks are full of blouses, pants, T-shirts, dresses, coats and everything in between at Evy’s Closet after... read more