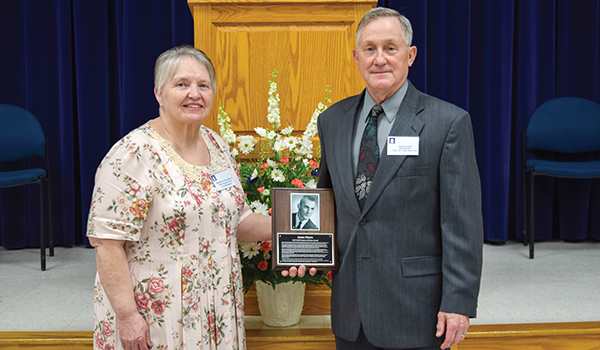 CASSOPOLIS — More than 50 years after his graduation, a retired area educator and coach took the stage at his alma mater last weekend to celebrate his student achievements.

James Myers, 72, Edwardsburg High School Class of 1966, was inducted into the Edwardsburg Public Schools Hall of Fame last Saturday. He was nominated under the Student Activities Award, which is meant to honor an Edwardsburg graduate who performed with excellence in academics and co-curricular activities and has been out of school for at least 10 years. Classmate Terry Bidwell nominated Myers.

“It’s a great honor,” said Myers, a Niles resident. “It’s an honor that someone would recognize that you were a good student and involved in a lot of things. I was always proud of my school. We had great teachers and coaches and people who inspired me.”

Outside of athletics, he was named Most Outstanding Student in his junior class, named Most Outstanding Science and Social Studies Student, placed first in the Edwardsburg High School Science Fair in 1963 and 1966, placed fifth at the Tristate Regional Science Fair in 1963 and received the Bausch and Lomb Science Award in 1966. He was also a member of the Science Club, Varsity Club, E Square Club, Bridge Club, National Honor Society and Student Council, in addition to playing a cast member in the musical “High Button Shoes.”

He graduated third in his class.

“At the time, it didn’t seem like I was that busy,” Myers said with a laugh. “I think I’m just the type of person who likes to keep busy. I like to be challenged, and I like to do things well. I guess you would call me a ‘type-A’ individual.”

Myers said his desire to keep busy followed him outside the halls of EHS.

After high school, Myers graduated with honors from Michigan State University and later earned his master’s degree from Western Michigan University. He taught at Dowagiac Middle School before being drafted into the Vietnam War.

Once Myers returned home, he taught biology and chemistry at Brandywine Community Schools, where he also served as a coach. He retired from Brandywine after 36 years, and went on to teach for several more years at Lake Michigan College.

“Work hard and don’t be afraid to take challenges,” he said. “My dad taught me that anything worth doing is worth doing well, so try to do everything in the best way that you can.”

NILES – Mel Spencley is excited to get Niles’ first official cannabis festival right, which some have called “a mini... read more