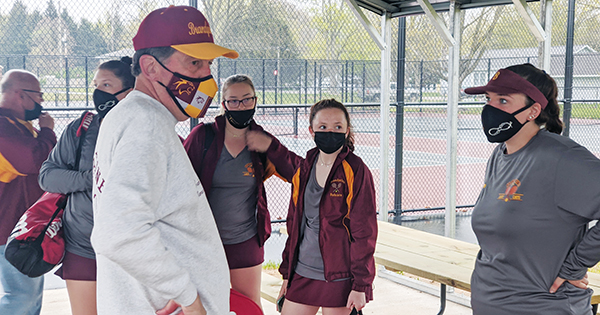 The Bobcats were leading in every match before the event was called off due to extensive rain. Bridgman-LMC was without several players due to quarantine.

“It’s kind of been a microcosm of the year,” said Brandywine coach Joe Mazarita. “Either we’ve got players that are quarantined, and then today our opponent had four or five kids out that were quarantined. They didn’t have a full roster. Overall, I was pretty impressed with the level of play that we did exhibit today. I thought our team is, compared to some of the other teams that I’m seeing, just a little bit ahead of them right now, so I’ve been very satisfied with our level of play so far.”

Mazarita is proud of his team’s work ethic. While the Bobcats are relatively inexperienced this year, he said they are making up for it with their talent.

“We have a very athletic team,” he said. “A lot of our kids get into the Lakeland Club and play over the winter. With us having the eight new courts here now, we’re able to get a lot done when we do have practice and we had a really good turnout this year, so even though we only had one returning player from last year went after the suspended this season, the fact that we have these new courts is really made it easier for our kids, but this now even during the summer, they can just come down here and play on their own they don’t have to go clear the fun parking play.”

Brandywine is 4-0 in BCS play with two conference matches remaining. Mazarita hopes his team can stay healthy down the home stretch.

“The only goal I ever have is just to get the kids to give 100 percent,” he said. “That’s half the battle right there, and we had a really good turnout this year. This season is going on better than I expected yeah, but you just don’t know because every week you could find kids that needed to be quarantined, and we’d have to constantly readjust our lineup. So far, so good.”