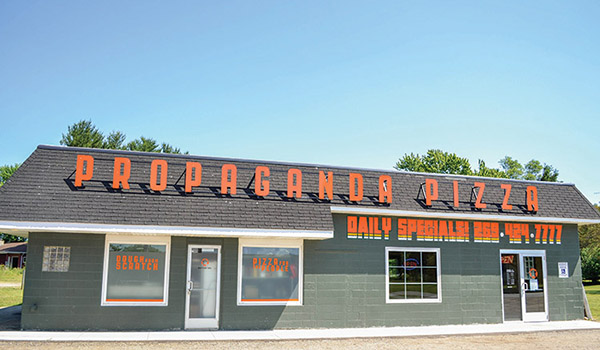 CORRECTION: A previous version of this article erroneously listed a South Bend brewery as being owned by Haunt of Hounds LLC. We regret the error and are happy to correct it.

DOWAGIAC — A prominent downtown building that has sat vacant for more than a year will soon have new ownership serving up food.

The Dowagiac City Council unanimously passed a resolution to authorize a letter of intent with Haunt of Hounds LLC for the sale of 105 to 109 S. Front St. — the properties that make up the former site of Zeke’s Restaurant — for the price of $250,000.

Haunt of Hounds is based out of South Bend and was founded by restaurateurs Tim Tinker, Jordan Mullins, Alain Helfrich and investor Austin Cabello.

The company owns and operates several restaurants in the Michiana area including Fatbird, 103 W. Colfax Ave, South Bend, and an establishment locals may be familiar with — Propaganda Pizza at 92018 M-152 in Sister Lakes.

“We really think this is a good restaurant group that will be here,” said City Manager Kevin Anderson. “This agreement is centered around promoting additional investment into the city.”

The city will hold a five-year note for the $200,000 sale price of the building so that the restaurateur can use their existing cash/bank financing to make improvements and cash flow startup costs.

Annual payback of the note will be $40,000 per year. If the developer invests and documents an investment no less than $200,000 in building improvements, the $40,000 annual payment will be forgiven for each year that the restaurant remains open and operational for 12 consecutive months.

The two parties are expected to close before June 1, once documentation is in order. Anderson believes the sale of these properties will cause for significant additional tax base and utility revenues as well as increased economic activity within the city.

“Over the long haul, this should be a real solid economic gain not only for the city but also for the community to have another solid restaurant with a new approach in our downtown,” he said. “It should be a destination-driven type of restaurant.”

The move is the latest in the city’s efforts to fill the vacancy in the community left by Zeke’s Restaurant, which closed abruptly in January 2020 after more than 30 years in business. The city then purchased the property with hopes of finding a quality buyer.

Last month, city council approved a resolution approving the sale of 103 S. Front St., a section of the building, to DTG Properties for $95,000.

“We talked about this last month, but as restaurateurs were looking at the property, they would say that there’s too much seating capacity and that they wanted to refine that down before moving forward with any deal. We think selling that section of the property played an important role in us being able to get this deal done.”

In other business, city council passed a resolution to authorize the transfer of a portion of property located on S. Front back to the Douglas E. McKay Trust.

According to a memo from Anderson to the city council, the city authorized a real estate transaction with the McKay Trust for several properties in and near the downtown in February 2019 for the purposes of redevelopment, park expansions and blight elimination.

The property adjacent to Beckwith Park was donated to the city as part of the transaction. Included in the donation was a small structure that housed refrigeration units that were being used by the former Round Oak Revisited restaurant.

The city had a verbal agreement with the restaurant owners regarding how the structure would be handled when park reconstruction began but ownership of the restaurant building has reverted back to the McKay Trust since then.

It is in both parties’ interest to return the structure to the trust as they work on marketing the property.

“This property will have no impact on the redevelopment of Beckwith Park which is currently underway,” Anderson said.

In additional business, the city council passed a resolution to accept a proposal to purchase a property in the 500 block of E. Telegraph from a Dowagiac resident in the amount of $5,000.

The property was purchased by the city last year as part of a blight removal project. After cleaning up the blight, the city put out a request for proposal last month and received a proposal from an interested party in early April for the sale price of $5,000.

According to Anderson, the interested buyer is a resident of Dowagiac with a proven history of home rehabilitation. The proposal outlines the contractors that will be used, and he estimates an approximate timeline of 90 days to completion, post-sale.

The buyer estimates that the improvements will cost anywhere between $8,000 to $20,000.

BENTON HARBOR — “Mshkiki” is the Potawatomi word for medicine, and the Pokagon Band of Potawatomi is doing its part... read more