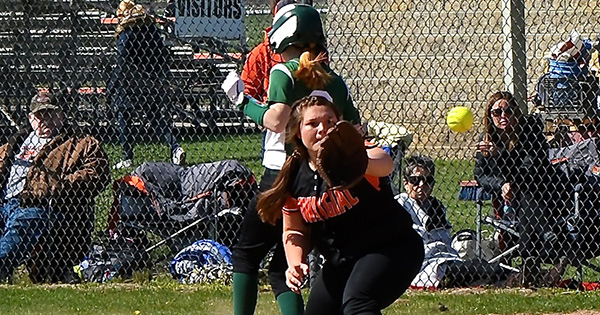 The Eddies won the opening game 12-2 in five innings, while the Chieftains rebounded to win the nightcap 6-5.

In the first game, Hannah Hartline scattered five hits to pick up the victory for the Eddies, who are now 6-2 overall.

Edwardsburg finished with 11 hits, including a double and a home run from Caitlyn Tighe. Ella Castelucci and Abby Bossler both doubled for the Eddies.

Dowagiac (5-2) had five hits, including doubles from Sierra Carpenter and Aubrey Busby.

In the nightcap, Carpenter picked up the victory in the circle as he allowed five runs on eight hits.

Dowagiac finished with six hits, including a pair of doubles from Anna Dobberstein and a double by Busby.

Tighe also had a double and a home run in the nightcap. Alyssa Gearhart added a double.

“The girls played well tonight to earn the victory in the second game,” said Dowagiac coach Mike Behnke. “It has been five or six years since we have beat the Eddies. Three girls on the team have older sisters who were on the last team to beat them. Sierra Carpenter pitched a great game, we got timely hits with runners on base, and Caleigh Wimberly made two great plays on the same play in the bottom of the seventh to record the second out. We’ll enjoy this win over the weekend but it will be back to business as usual Monday with a road trip to Vicksburg on Tuesday.”

The host Rangers were swept by Hartford 12-0 and 15-0. Neither game lasted more than five innings.