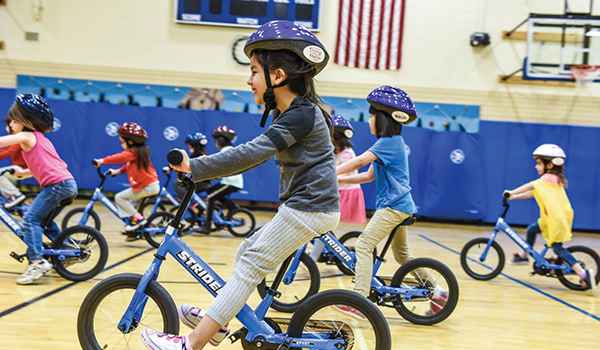 BUCHANAN – This Saturday, a Buchanan Community Schools physical education teacher will be teaming up with volunteers from Bike Buchanan to build more than 20 Strider bicycles for students to use at the elementary schools.

Jessica Leenhouts, PE educator at Ottawa and Moccasin elementary schools, discovered the All Kids Bike organization while scrolling through Facebook in a physical education teacher’s group.

“We’re on a mission to teach every child in America how to ride a bike in kindergarten PE class,” reads a photo caption on All Kids Bike’s website.

The mission spoke to Leenhouts.

“I looked into it and loved the idea,” she said. “I got approval from the school to do the program.”

The next hurdle was raising the $5,000 it would take to get a class set of Strider 14x Balance Bikes and helmets.

The Strider 14x Balance Bikes have a seat, handlebar and wheels like a regular, child-sized bicycle, but they do not automatically have pedals installed.

Leenhouts began a fundraising campaign within her classroom’s social media page for parents and friends to donate to. That is when a parent tagged in Liz Martin, founder of Bike Buchanan.

“One of the high schools that rides with the bike group reached out to me in January,” Martin said. “She sent me a screenshot of the Facebook post.”
Martin got in contact with Leenhouts about the All Kids Bike initiative, and she said they “hit the ground running.”

“It’s pretty amazing how we were able to get the program enacted before the school year ends,” Martin said.

Martin’s group, Bike Buchanan, meets throughout the warmer months at River St. Joe on Tuesday evenings to ride their bicycles in groups based on skill levels.

“[Bike Buchanan] has grown over the past couple of years. Personally, I’ve been ideating how we could make the group more than an outlet for recreational activities,” Martin said. “Are we just a bike ride group, or are we something more? This was pulling at my heart strings because I think it’s so vital to get younger humans out on bike and learning about their bodies and wellness.”

Between the families and Bike Buchanan member contributions, Leenhouts’ All Kids Bikes fundraiser was soon halfway funded. The other half was funded by a grant through the Michigan Gateway Foundation.

This weekend, about 10 members of Bike Buchanan will join Leenhouts in her garage to assemble the Strider bikes before they arrive at the elementary schools.

Leenhouts hopes to use the curriculum the All Kids Bike program comes with, with her students. She hopes the bikes will provide an indoor and outdoor activity to give younger students further engagement, especially during pandemic restrictions.

Martin grew up riding her bicycle, and returned to doing so as an adult before she founded Bike Buchanan.

“It’s amazing we are able to get these bikes in these schools for kids to learn to ride on, and instill that mental outlet that I sought out when I was a younger person,” Martin said.