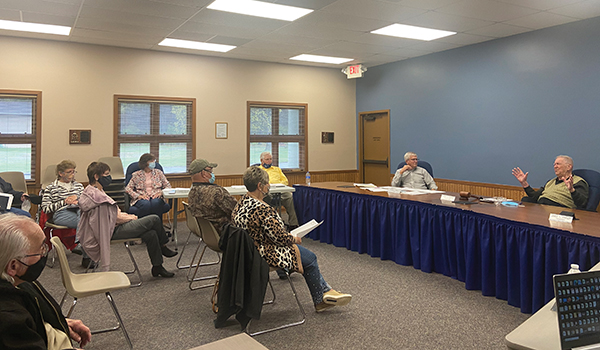 Prior to the regular meeting beginning, a public hearing was hosted by the Niles Charter Township board of trustees to hear thoughts from the residents on Evergreen Road who had sought to have the road improved. The road’s current conditions make for a bumpy drive for those who use it.

Residents in attendance of the public hearing leaned in favor of a crush and replace asphalt solution, as opposed to a double chip seal and preparation fix. However, final numbers on the cost were not available at the time of the meeting.

Residents Erna Burge and Johnny Hunt expressed concern over the cost residents of the road were being asked to shoulder for the repairs, including the legal publishing costs being rolled into estimates.

“Whatever it takes to become a legal entity, [similar to] the engineering fees, the legality part to make it its own entity so we can legally collect [payment], it’s all part of the district being requested by the homeowners,” said Treasurer Jim Ringler. “It’s always been that way.”

A unanimous vote was taken by the trustees to approve the district. Homeowners will see an annual bill to pay fees for the roads, with a 3.5 percent interest rate.

A resident from on Bicknell Road, another road in the township where homeowners have voiced concerns for the condition of the road, was in attendance to the meeting.

Supervisor Jim Stover said everyone who was involved directly on the street would need to be involved with the decision, in the same process as to how the Evergreen Road decision was made on Monday evening.

“I’ll send out the invitation to see what [residents] want to do,” Stover said. “Do you want to do gravel, prime and double seal, or do you want to put down asphalt? It’s all very similar to what we just did.”

“There are certain parts he carries over from the [firefighter’s] union,” Ringler said. “He gets a fireman’s pension from the union, as long as he’s fire chief, he gets that and he contributes to it.”

Jesswein will be on probation for his first year as fire chief for the township department, after which he will get a one-time raise and then be subject to the percentage raises township employees receive annually.

Later during the meeting, tree removal was approved at Fireman’s Park, near the pickleball court, and at Samson Park.

Cass County millages on the ballot for May 4

CASS COUNTY — Three Cass County millages will be on the ballot May 4 for a special election. According to... read more