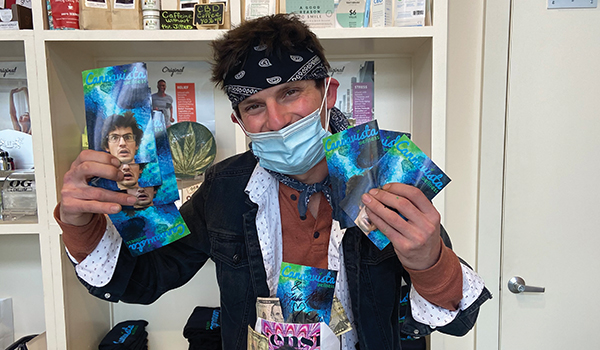 Freddie Miller, Cannavista Wellness staff member, has been a feature on Jimmy Kimmel Live. For 4/20, he was eagerly welcoming customers into the provisioning center. He was excited to be selling branded photographs to help raise money for Redbud Area Ministries and the Last Prisoner Project. (Leader photo/CHRISTINA CLARK)

SOUTHWEST MICHIGAN – The day almost seemed to go up in smoke for some area cannabis provisioning centers in Buchanan and Niles, while others celebrated 4/20 as business rolled on as usual.

Businesses who relied on Flowhub, a cannabis point of sale system, found themselves pausing sales on one of the biggest days of the year. Others, who use different software, were able to continue cash sales of green product.

Cannabis and cannabis use is commonly celebrated across the U.S. on April 20, or 4/20.

Despite the cold temperatures and wet snow throughout the day Tuesday, patients and customers rolled in to provisioning centers in Buchanan and Niles.

Jared Vail, of Wisconsin, was in Buchanan visiting family and braved the weather to wait outside of Zen Leaf, 259 E. Front St., Buchanan.

Vail said he liked the variety of places Buchanan had to offer.

“It’s a nice town, and there are five places to go,” he said.

Vail’s wait was about 10 minutes on the sidewalk to go inside Zen Leaf. A representative from Zen Leaf declined an interview, stating the center was too busy with increased sales.

It was a sentiment likely felt by many area provisioning centers in Niles and Buchanan.

Down the block, at Cannavista Wellness, 120 E. Front St., Buchanan, the staff was busy getting customers checked in and into the provisioning center’s retail space.

Freddie Miller, known for his appearances on Jimmy Kimmel Live, was keeping energy light and lines moving while working the front of the Cannavista Wellness’s storefront.

He said the key to them keeping the lines moving was an unspoken communication system between everyone in the shop.

Miller greeted customers, some of them in the shop for their first time, with a familiar “hey, buddy, how’s it going?”

The energy and ease seemed to make them more comfortable as they waited to be admitted into the purchasing area.

Miller said the shop had been continuously busy since he arrived.

At the counter, Miller had a stack of photographs available for a donation of $5 apiece. He was using the donations to raise money for Redbud Area Ministries and the Last Prisoner Project with Cannavista Wellness’ fundraisers.

Around back in the parking lot, Tim Carrigan, owner and chef at Wood, Stock and Grill, had one of the signature Volkswagen Beetle grills under a tent ready to serve up food for those who had made purchases in Cannavista Wellness. Carrigan said Wood, Stock and Grill had VW grills stationed at Green Stem Provisioning Center, 1140 S. 11th St., Niles, and another at High Profile, 804 E. Front St., Buchanan.

“[Business] has been pretty steady, it comes in waves,” Carrigan said. “People have been going inside [the provisioning centers] first and then getting some food afterward.”

Down the street at Pinnacle Emporium, 221 E. Front St., Buchanan, owner Michael Silver said getting ready for the busy week was reminiscent of a Christmas-like atmosphere, as staff prepared for 4/20.

The company’s payment platform had connectivity issues throughout the day, which slowed admittance to the center and sales down.

“Obviously, on a day like today it’s decidedly inconvenient,” Silver said. “We are working through it, though. Sales have been great. Support from the community has been great. People were out first things.”

Silver said the provisioning center’s staff had been working late into the night before to prepare for 4/20 crowds. Even with the challenges, Silver said everyone had “high energy” and customers had been understanding, overall.

“There were about four and a half hours we couldn’t connect to the state. If you can’t go to the state and report, you can’t be open,” said George Lynch, owner of Green Stem Provisioning. “It’s been a disaster.”

Lynch said the center had to turn around 200 people away throughout the day while he and the staff waited for the system to reconnect properly to Michigan MRA.

Lynch said the issue happened across the country, not just in Michigan.
He said the provisioning center had planned specials for the day, and would likely extend them to Wednesday as staff had to turn so many customers away.

“I stuck with paying people, and keeping the community going,” Lynch said, as he chose to have staff stay at the center, uncertain as to when the point of sale software to reconnect.

Across Niles, at The ReLeaf Center, manager George Pittenturf said their center also experienced the software glitch on Tuesday.

“We had to take some time to start to get back up and running,” Pittenturf said.

Just before 5 p.m., Pittenturf said the center had a line of customers out the door and cars were still wrapped around the building for the curbside service.

“We’re relentless and not giving up,” he said.

The software issue was just another bump in the road for dispensaries that opened last year prior to the arrival of the COVID-19 pandemic, which effectively shut down traditional 4/20 sales.

“Last year, we couldn’t have anybody in the lobby. We’re still adapting to it,” Pittenturf said. “This year’s a little off. We wanted to do more than we could. We had a snowstorm. But we have a really good staff, which goes far beyond the dispensary to our grow operation.”

SOUTHWEST MICHIGAN — As of Tuesday, Berrien County reported 12,787 COVID-19 cases and 240 deaths, according to the Michigan Department... read more