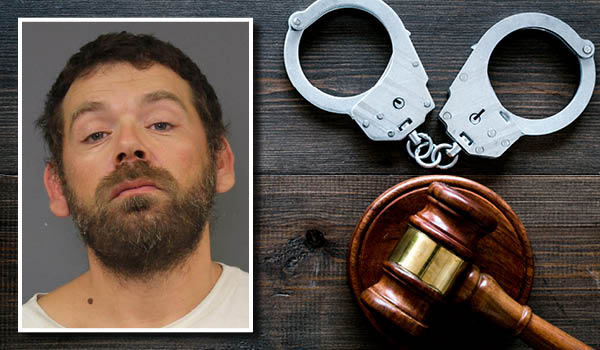 Neil Courtney Bennett, 49, of South Bend, pleaded guilty to possession of methamphetamine and was sentenced to 14 months to 10 years in prison. He has credit for 55 days already served and must pay $198 in fines and costs.

The incident occurred Feb. 24 on Niles-Buchanan Road in Niles Township.

Defense attorney Carri Briseno noted that Bennett had been working in the year prior to the February incident but had suffered the loss of a number of relatives.

“He went through a period of grieving, and he didn’t handle it well,” she said. “He began drinking again, and it led to other poor decisions.”

While Briseno and Bennett said he had the opportunity to move out of the state for work, Berrien County Trial Judge Sterling Schrock said the choice was between prison and the Swift & Sure Sanctions Probation Program which would require Bennett to live in Michigan.

“This is straddle cell sentence. It’s just a question of where he’s going to serve it, Swift & Sure or prison,” Judge Schrock said. “He’s got all the excuses in the world. … He doesn’t want to be supervised in Michigan and take advantage of treatment. It’s his own choice.”

James Matthew Sanders, 58, pleaded guilty to resisting and obstructing police as a habitual offender and was sentenced to 14 months to 4 years in prison and $198 in fines and costs. He has credit for no time served as he was on parole at the time of the incident. The 14-month prison term will be consecutive to any parole violation sentence.

The incident occurred Nov. 6, 2020, in Niles. He was released from prison in October 2016 and his parole was scheduled to be up Dec. 9, 2021. He received a two-year prison term in 2014 for resisting and obstructing police, a 14-month prison sentence in 2012 for resisting and obstructing police. In addition, he had three other prison sentences previously.

Briseno said Sanders had had no police contact for a number of years, was working and had appeared to be doing well before the incident. She asked for a lesser sentence since Sanders did not get credit for the time he has spent in jail.

“I’d just like to say that I’m sorry for my actions, I’d like to get this over with and not get in any more trouble,” Sanders said. “I’m too old for this. I’ve made bad decisions in my life, but I want to move on and live a normal life.”

Judge Schrock noted that Sanders had had plenty of opportunities to live a normal life but had absconded from parole.

In other sentencings, an area resident with pending assault charges was sentenced to jail.

Aaron Andrew Smith, 40, of Berrien Street in Eau Claire, pleaded guilty to fleeing and eluding police and was sentenced to 120 days in jail with credit for six days served. He must pay $758 in fines and costs.

The incident occurred Oct. 26, 2020, in Berrien Springs. Smith has two pending felonious assault cases that occurred after this incident.

Briseno noted that Smith had had a rocky juvenile and young adult period but had had no criminal activity from 2004 to 2018.

Judge Schrock noted Smith’s two pending cases in fashioning his sentence. “I also have to consider the traditional resources and efficacies we have, I wonder if there is any utility in imposing a probation sentence when he faces serious charges,” he said.

GateWay Services to become Center for Growth and Independence