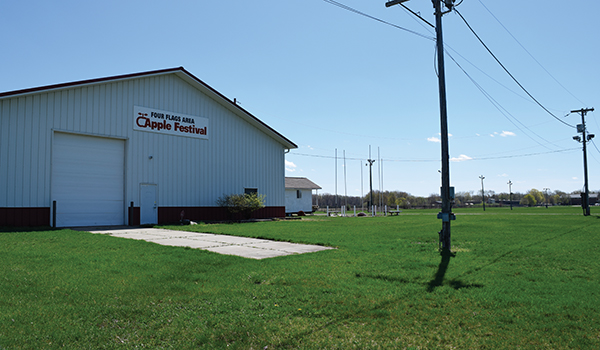 NILES – Fourth of July fireworks are already on the minds of events organizers and city leaders in Niles.

During the Niles City Council committee of the whole meeting on Monday evening, council members discussed concerns around allowing nonprofit Niles Music and More to move forward with planning the Fourth of July Fireworks at the Four Flags Apple Festival grounds.

In June 2020, the event was canceled in just days after being given the go-ahead by the city council due to difficulty in securing commitments from vendors and uncertain COVID-19 mandate shifts.

City Administrator Ric Huff said there was a desire to have a Fourth of July fireworks celebration this year.

“The typical location, although not the only location, is the [Four Flags] Apple Festival grounds,” Huff said. “That grounds are 95-percent owned by Niles Community Schools.”

The city owns a small portion of the grounds, where a beer tent typically may be set up during other events. Huff said the school had agreed the grounds could be used for fireworks, but were “adamant” that all COVID-19 restrictions would be followed.

“We have no idea what COVID-19 restrictions will be in July. There’s quite a bit of planning that goes into this,” Huff said.

Huff said that for the fireworks events, people tended to stay with their family and friend groups naturally in years past.

He said the issue would be pre-selling tickets and trying to prevent people from walking onto the property, and not crowding on neighboring properties.

Bob Landgraf, Niles city attorney, had concerns about the parameters of the city’s obligations for events like this.

“This isn’t a city event, per se. It’s the city participating or giving permission, and giving a permit,” Landgraf said. “So, we say ‘go ahead and comply.’ Then things [could] get worse or a situation arises such that the state just says ‘you can’t do this.’ I’d hate to see the responsibility and the consequences of trying to undo something like this on July 1 or 2.”

Landgraf had concerns that an event organizer may defy mandates and continue to move forward with an event if the mandates changed close to the date.

Mayor Nick Shelton said if any agreement were made to permit an event like the fireworks, it would come with contingencies for COVID-19 mandates. One mentioned was disallowing an organizer to launch fireworks from the Jerry Tyler Memorial Airport, which the city of Niles operates.

“That’s how it shut downs. I don’t want to put [organizers] in that situation, but if they’re creative and want to find a way to make it work safely, why not allow them to try?” Shelton said. “They might not want to try.”

Council member John DiCostanzo said the event’s organizers should be empowered to look at the options to move forward.

“I think [organizers] will have the same concerns that we have been expressing here. If they don’t think they can do it, they’ll make the smart decisions. They don’t want to be out all the expenses,” DiCostanzo said. “They’ve got some time. I think within the next week or so we’ll understand if the governor is going to tighten up the restrictions or if she’s going to loosen them up.”