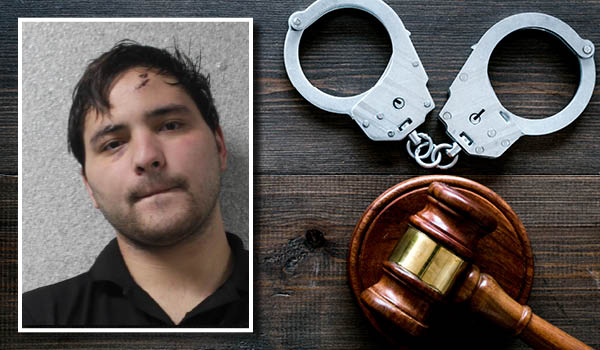 Joseph Paolucci-Hitchcock, 22, of Buchanan, pleaded guilty in two cases, one for aggravated assault from a 2020 incident and one for a probation violation in a 2018 case, and was sentenced to credit for 49 days in jail already served and $635 in fines and costs on the assault case.

His probation was extended from three years to four years in the 2018 case. Another condition was added for him to get anger management assessment and treatment.

The 2020 incident occurred May 21, 2020, in the city of Buchanan. He had initially been charged with assault with intent to do great bodily harm less than murder. The 2018 probation stemmed from a conviction for attempted larceny from a person from a 2018 incident in Buchanan.

Defense attorney Lanny Fisher said his client has made real progress and is now employed. He noted that his client had substance abuse issues in the past which he has gotten help for. For his part, Paolucci-Hitchcock apologized for “messing up” before and said he wanted to put everything behind him.

“There appears to be enough time left to monitor you on probation and there is a new law where probation can be extended with a new charge,” he said.

Defense attorney Kaitlin Locke noted that the case goes back to 2018 and her client was not arrested until 2020.

“He has turned his life around,” she said. “He is working. he’s married and has two minor children he supports. His life consists of going to work and going back home. Thankfully he’s changed his life around without jail time.”

“He’s a completely different person than he was in 2018,” she added. “His father had recently passed and he was going through a hard time and acting out and acting irrationally. He is doing much better. His family is doing better and he is sober.”

She and Jennings said he was taking controlled substances at the time of the 2018 incident in order to get to sleep.

BERRIEN COUNTY – Students around Berrien County left for spring break on April 2, and returned to classrooms with their... read more