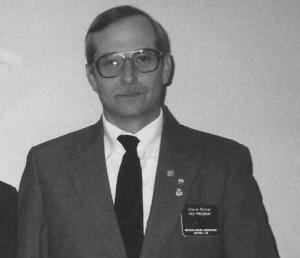 Stephen C. Richer, 65, of Niles, passed away at his residence on Thursday, April 8, 2021, suddenly, of natural causes.

Stephen graduate from Cassopolis High School, class of 1973. He worked for many years in the RV Industry prior to his retirement. On Sept. 23, 1988, he married Hazel McGraw at a ceremony in Sumnerville.

He was an active member of the Moose Lodge #978 in Niles where he held every office, receiving his fellowship in 2001. Stephen enjoyed time on the golf course, watching NASCAR and a sports enthusiast, cheering for the Detroit Lions and University of Michigan. One of Stephen’s final days was spent doing what he looked forward to, working on his yard.

Stephen is preceded in death by his parents; his wife, Hazel Richer; and a sister, Dawn Miltenberger.

He is survived by his siblings, Charles M. Richer II, of Elkhart, Cindy Sumner, of Niles, and Tina Meehling, of Kalamazoo; his step-mother, Peggy Richer, of Niles; Several nieces and nephews; step-brothers, Ed Dettling, of Webberville, Michigan, and Michael Dettling, of Kentucky; step-sisters, Kathy (Donnie) Batman and Karen Dettling, all of Niles; as well as Hazel’s children and grandchildren.

Remembrances of Stephen may be left for his family at www.BrownFuneralHomeNiles.com.