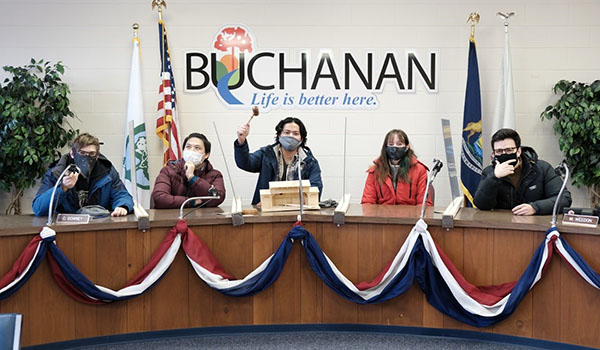 BUCHANAN — The city of Buchanan has been working with the Andrews University School of Architecture and Interior Design since early January to craft a collective vision for redevelopment in and around downtown and the north side. Now, the students, led by Professor Andrew von Maur, invite the public to attend a presentation of their work at 5 p.m. Wednesday, April 28 at The Common in downtown Buchanan. The students were engaged by the city of Buchanan to reimagine redevelopment opportunities in Buchanan.

“This will be a special evening for the city of Buchanan to unveil its collective vision for the future,” said Mayor Seann Denison. “What a better setting than to do it than at the Buchanan Common in the backdrop of our beautiful Historic Downtown. I could not be more excited for the future of Buchanan.”

“Working with Buchanan has been a riveting experience. It was eye-opening to see the passion that these citizens have for their small town, and it makes me excited for the future of Buchanan and my future career as an architect,” Pineda said.

Since early January, the fifth-year architecture students have been having conversations with residents, businesses, local students, community groups, city leadership and other stakeholders about what they envision for the future of Buchanan. This event will be the first unveiling of this collective vision for the city of Buchanan. “The goal of the project is to provide a roadmap for the next wave of redevelopment and revitalization in Buchanan,” said Community Development Director Rich Murphy. “This event will be a celebration of the future of Buchanan and a chance to build the buzz on this collective vision and then launch into the marketplace for implementation. This is an especially talented group of students who has a done a deep dive into Buchanan in order to forge a consensus on community priorities and redevelopment opportunities.”

City leaders said they were excited about both the project and the event taking place on April 28.

“This is a special time in Buchanan,” said City Manager Heather Grace. “There is so much positive energy here right now. It’s really inspiring to see the community come together and rally around this project.”

LANSING — On Thursday, the Michigan Department of Health and Human Services announced that Berrien County’s Andrews University would be... read more