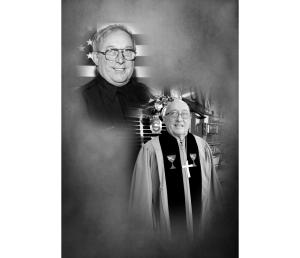 He was born Oct. 8, 1944, in Dowagiac, to Marshall Leroy Gifford and Edna Barbara (Rosenbaum) Gifford. He married Ann M. (Haworth) Gifford on March 25, 1972, in Salem, Illinois, she survives.

He was a 1963 graduate of Dowagiac Union High School, 1967 graduate of Eureka College in Eureka, Illinois and received his master’s in Divinity from Christian Theological Seminary in Indianapolis.

Reverend Gifford also served as a chaplain for the Johnson County Sherriff’s office since 1981, the Bargersville Police Department and the Bargersville Fire Department where he was a life member of the department. He also organized and created the chaplaincy at Johnson Memorial Hospital in Franklin, Indiana.

He was all about community and helping and assisting others in organizing and serving as past president of the Interchurch Food Pantry of Johnson County, organize and participated in the Johnson County CROP walk, organized and served as past president of the Johnson County Ministerial Association, volunteered on mission trips at First Christian Church Bargersville, where he also organized trips for the congregation and other community members for dinner outings with the church van.

The Reverends Peter Jessen, Dustin Hite and Jennifer Lewis will conduct a service Monday April 12, 2021 at 10:30 a.m. at Swartz Family Community Mortuary and Memorial Center 300 South U.S. 31 (Morton Street) in Franklin, Indiana and will be live-streamed for friends to connect at swartzmortuary.com/obituary/roger-gifford. Use Firefox Internet of Google Chrome for optimal viewing. The family will receive friends on Sunday April 11, 2021, from 2 until 7 p.m. at the mortuary. Facial coverings or mask and social distancing is required for those attending.

The family request memorial contributions be made to the Interchurch Food Pantry of Johnson County, 211 Commerce Drive, Suite A, Franklin, IN 46131 or at jcpantry.org.

Online condolences may be sent to the family at swartzmortuary.com. Information at (317) 738-0202.