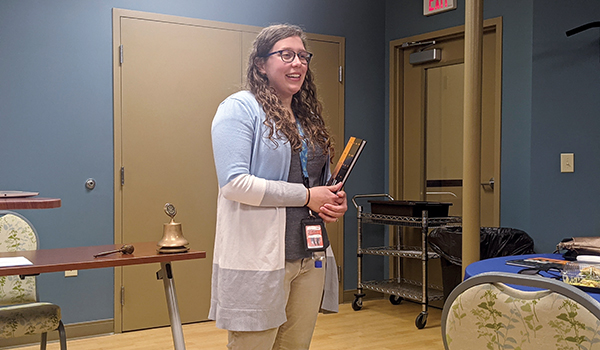 DOWAGIAC — Putting together a high school yearbook is a long process for schools around the country.

From helping students come up with a theme to gathering photos to making sure there is enough content to fill the book, teachers overseeing yearbook committees often have their hands full on top of their daily classroom duties.

This is especially true during an international pandemic.

But that is exactly what Dowagiac Union High School English teacher Krysten Turner was tasked with last year.

Turner was the guest speaker for this week’s Dowagiac Rotary Club meeting at Front Street Crossing, 227 S. Front, Dowagiac, where she discussed the process of producing a yearbook while navigating a pandemic.

According to Turner, she became a teacher at Union High in December 2017 after taking over for a teacher who resigned in the middle of the school year.

“I was taking over her schedule, which meant I was going to be doing a yearbook,” she said. “I took over and I didn’t know anything about yearbook whatsoever. I was not on the yearbook committee in school and so I was very much learning as we went along.”

Turner oversaw the production of the 2018 and 2019 yearbooks. Production for the 2020 yearbook was underway before the onset of the pandemic.

“When that happened, we had about half of the book finalized, another quarter of it very roughly sketched out and another quarter of it completely blank,” she said. “In March we took stock of how many staff members we had who were able and willing to continue work because they didn’t have to.”

Turner and staff volunteers spent weeks reaching out to teachers and students for pictures when she stumbled upon an advertisement for the Yearbook Angels program, which allowed businesses and community members to buy a yearbook for senior students in need.

“I follow a lot of other yearbook advisors and different districts, and I saw them post about this Yearbook Angels program that they were putting on,” she said. “I thought wow, that would be amazing since there are so many students who don’t get a yearbook.”

“I read that post and said ‘wow, that’s something I think our Rotarians would be interested in,’” Groner said. “I brought it up here at Rotary, and because of our club’s giving spirit, we were able to help by sponsoring several books so kids would have them.”

The club also bought an ad in the yearbook celebrating its 100th anniversary.

“I think it’s amazing and it certainly does a good job of helping the kids remember the year of the pandemic and how school was different,” Grover said.

The book’s theme, “This is DUHS,” was inspired by the unique stories each and every student in the district has.

“I have students who are working full-time while going to school full-time so we have a lot of very unique stories for our students,” Turner said. “We wanted something that would capture that so after multiple brainstorm sessions they came up with the idea of ‘this is us, this is who we are and this is what we have to offer,’ and somebody suggested we try ‘This Is DUHS.’ So we focused on who we are and what makes us unique from that.”

According to Turner, the program was a success. While the school is still working on distributing 2020 yearbooks, Turner said that every student should be receiving a yearbook thanks to the efforts of the community.

“Because there were enough donors across the board it brought the price down and with the advertisements, it ended up that we were able to purchase enough that every single member of the classic should be getting a book. COVID has made everything difficult so we are still tracking down some seniors from last year who still have to pick up their books. Hopefully in the next month or so when they’re all coming back from college and we’ll be able to make another sweep.”

Turner said this year’s yearbook has been challenging, but students and staff are more prepared. This year, Turner is allowing parents and family members of graduating seniors to purchase space in the yearbook to place baby pictures, graduation pictures and words of encouragement for their seniors.

“They’re very excited about that,” Turner said. “I’m anxious to see how that goes.”

CASS COUNTY — A local organization is running for a cause throughout the month of April. Domestic and Sexual Abuse... read more