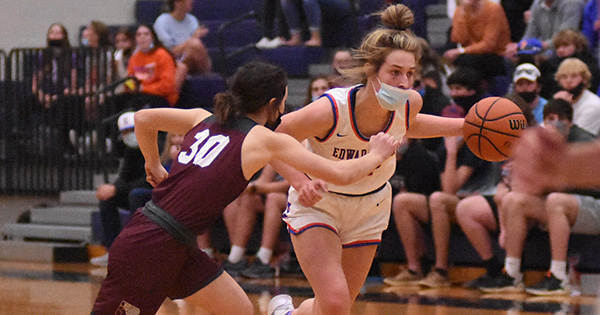 EDWARDSBURG — Unable to handle the speed and pressure of the Edwardsburg defense, the perfect season for the Buchanan Bucks came to a crashing halt at the hands of the Eddies in the Division 2 Regional semifinals Monday night.

Edwardsburg, seeking the school’s first regional championship in girls basketball, forced 28 turnovers in their 67-47 victory over the Bucks. The win propels Edwardsburg into the regional championship game at 7 p.m. on Wednesday against Wayland, which defeated Wolverine Conference champion Plainwell 54-41 in the second semifinal.

A 9-0 run in the first quarter turned a 2-2 game in the Eddies’ favor. Buchanan would never recover.

Turnovers and missed shots started piling up as Edwardsburg forced Buchanan into playing at their speed. The result was a 17-8 lead for Edwardsburg after one quarter.

The Bucks (13-1) played their best quarter in the second. They appeared to have gotten the early jitters out and began attacking the basket, which led by numerous Edwardsburg fouls and a chance for the Bucks to close the gap.

Buchanan could not get over the hump and ended up trailing 33-23 at the intermission.

“That first half, we were a little lethargic, and I was a little worried about that because we had that wave of emotion from Friday,” said Edwardsburg Coach Jon Pobuda. “Anytime you have those big emotional games, you worry about how you are going to come out. We were a little flat tonight all the way through.”

The Eddies (12-3) and Bucks played nearly even in the third quarter. Edwardsburg did manage to outscore Buchanan 18-17, which allowed it to increase its advantage to 11 points heading to the fourth quarter.

Buchanan seemed to run out of gas in the final eight minutes. The Bucks managed just seven points, while the Eddies finished with 16 to pull away to the easy victory.

Macey Laubach and Katie Schaible were a two-person wrecking crew against Buchanan. The pair combined for 31 points. Labauch seemed to be everywhere for the Eddies. She connected on 3-pointers, scored in the paint and turned in numerous defensive plays to help lead her team to victory.

“Macey does a little bit of everything for us,” Pobuda said. “She can play outside. She can play inside. We ask her to do a lot as an undersized big for us. But she is so athletic and she can get a lot of rebounds, she can attack the basket and she and shoot outside. She is like our Swiss Army knife.”

Schaible led all scorers with 17 points, while Laubach finished with 14. The Eddies also got seven points each from Averie Markel and Haley Masten.

Buchanan freshman Labria Austin tied for game-high honors with 17 points. Faith Carson added 11, all but one of which came in the second half.