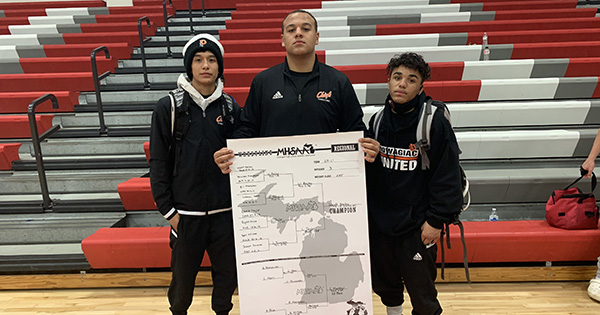 MASON — The Edwardsburg wrestling team did not show any side effects from being eliminated from the state team tournament as the Eddies advanced six wrestlers to the Division 2 individual state finals, including a pair of regional champions.

Dowagiac had the area’s other regional champion as the Chieftains advanced three to the Division 3 state meet. Brandywine also had three wrestlers advance.

In Division 4, Cassopolis moved one of two wrestlers onto the state finals, which begin a week from Friday in Kalamazoo.

Edwardsburg’s Jackson Hoover (145) and Caden Reece (171) were regional champions. Hoover won by technical fall over Jimmy Buurma of Fowlerville 17-1 in the championship match. Reece pinned Owen McDaniel of Plainwell in 3:56 of his title match.

Hoover, who finished third in the state last season, is now 18-4 on the season, while Reece is 18-5.

Bailey, who placed fourth in the state last year, improved to 25-0 on the season. Bailey, ranked No. 2 at 285, won by technical fall over Chuck Taylor of Constantine 21-5. Also advancing for the Chieftains were Jorge Gamino-Rivero at 103 and Jordan Simpson at 112. Simpson, like Bailey, placed fourth at the state meet in 2020.